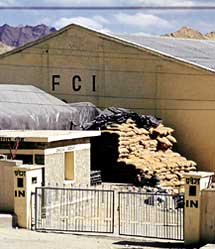 the Food Corporation of India (fci) may soon trade its surplus wheat and rice in the domestic commodity exchanges through futures transactions, say fci sources. Even as Asia's largest food-procurement agency toys with the idea, the trader community, brokers and exchanges are apprehensive.

A futures contract is an agreement made between parties to buy or sell a commodity at a future price decided in advance, based on available demand/supply information. Such a contract would serve two functions for fci -- as a seller this could ensure it a better price, and as a buyer, it would procure grains at the right price. fci could utilise the price secured from futures trading to pay the minimum support prices to farmers, thereby saving on subsidies. Over 40 per cent of fci's food subsidy costs comprise storage and interest costs. This is more than Rs 10,000 crore for the fiscal year 2004-05 making fci's entry into the market crucial (see box: Commodity bytes).

fci disposes its surplus unprofitably in the open market sales scheme (omss) or through exports. Exports get lower prices than grains offered to people below poverty line, reveals a report by the Comptroller and Auditor General.

This move will affect the interests of brokers and the trader communities in the exchanges. "Traders are apprehensive that the entry of fci would end all speculations and stabilise the prices of commodities. This would limit the chances of profit-making. But the situation could be reversed if fci enters as a buyer," says Bharat Singh Rawat, commodity analyst in New Delhi. fci's entry as a seller could steady the foodgrain market as information of the surplus and shortage would be out in the public domain, making trading positions crystal clear, Rawat explains.

fci is infamous for its in-house corruption, so there are chances that the agency might fail to oblige with the contract delivery norms of futures trade, says Sanjiv Nagar, fine cereal trader in Mumbai. But this seems unlikely since fci has the largest number of warehouses across the country, assuring the delivery of foodgrain. But corruption in fci could be an impediment.

Nagar feels that fci is bureaucratised and incapable of taking decisions on its own. Besides the agency works for national interest, which at times hurts its commercial interests. But Samir Mahindroo of Dow Jones Newswires, New Delhi, says fci will place only 7-8 per cent of the total foodgrain available for futures trading. At present it places the same percentage of grains for sale under omss. Hence, there should be no conflict between national and commercial interest.

The three largest national commodity exchanges -- the National Commodities & Derivatives Exchange (ncdex) and Multi Commodity Exchange in Mumbai, and the Ahmedabad National Multi-Commodity Exchange of India Ltd (nmce) -- are uncomfortable. Till recently they were vying for increasing trading volumes through futures in grain, but fci's entry has made them uneasy. " fci's entry at this stage in futures trading is risky as it could significantly affect the futures prices due to its large operation. Besides, they are not capable of handling sophisticated online futures trading," said an official at the nmce, wishing to remain anonymous.

Though ncdex already has an understanding with fci to revitalise the latter's procurement, grading and trading processes, it's not exactly bullish on fci's futures trading plans. Sanvali Kaushik, vice-president, ncdex, says, " No decision on futures trading has yet been taken. But introducing options trading could benefit both the farmers and fci, providing exit options to both buyers and sellers at any stage of the trade." However, given the state of the market, options are not a real option.