‘FDI will increase farmers’ earnings by 40-50 per cent’

P Chengal Reddy is general secretary of the Consortium of Indian Farmers Association (CIFA)—an organisation that claims to represent 40 million farmers. He is also part of the league that supports FDI in retail sector. He spoke to Jyotika Sood on how FDI can help Indian farmers. 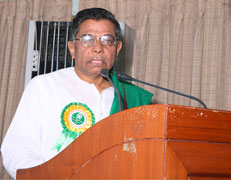 Why do you support FDI in retail sector? How will it help farmers?

We have to accept the fact that foreign direct investment (FDI) is beneficial to all the farmers, especially for around 600 million farmers who have small land holdings. The general method of selling produce in the market is through mandis where farmers fall prey to commission agents or arhtiyas. The existing arhtiya or dalal system is highly exploitive and monopolistic in nature. The agents form cartels and manipulate prices. They charge 10 per cent commission and then deduct 10 per cent of price on the pretext of bad quality. The illiterate famers get cheated. FDI will help develop alternative marketing channel for the farmers to sell their produce.

The entry of big retail chains would mean steady supply of agricultural  produce like vegetables and fruits. Do you think Indian farmers can meet the demands of these corporate retail chains?

Farmers can beat the challenge by forming producer groups. The concept is already being implemented in India by the Centre under a program called Agriculture Technology Management Policy (ATMA), which helped establish commodity interest groups. These groups are supported by the agriculture department and that help them obtain quality seeds and fertilisers. These producer groups or commodity interest groups are constantly advised by block technology management teams also on quality parameters.

Steady supply would also mean going on with legal/illegal arrangements of companies with farmers. Don't you think it will increase corporate farming in India?

No, there is no scope for corporate farming through FDI. Producers’ groups can enter into legal Memorandum of Understanding (MoUs) with retails companies. The MoUs should have legal arrangements for backward linkage through which the retailer will supply seeds, fertiliser and extension services. The MoUs should also contain provisions on price regulation where the producers will be paid a minimum guaranteed price and other facilities like crop insurance. Besides, packing and grading will also be done at the farm gate. In return, the producers should maintain quality and adopt the conditions of the MoU. The agreement can be on a yearly basis or long-term basis. Our organisation CIFA has suggested that a regulator be appointed to monitor misuse of such arrangements by both the sides.

How can you assure that farmers would get better prices from big retail chains?

To sustain themselves in the market, retailers would require continuous supply of quality agricultural produce on time. They have to establish backward linkage without which they cannot meet the demands of consumers. The farmers will certainly get fair prices. They will also save on commission charged by arhtiyas, transportation cost and a day’s labour. The total saving will be around 40 to 50 per cent.

How many farmer groups are supporting you?

CIFA has a membership of 40 million farmers through 350 associations spread across 12 states. Our association represents all the sugarcane growers and a large number of paddy, wheat, cotton, chilly, tobacco and onion farmers. Our organisation also represents horticulturists especially farmers growing mango, vegetables, coconut and apple. The coffee and rubber farmers of Karnataka, Kerala and Tamil Nadu are also a part of CIFA.

According to you which are the states where farmers can support FDI?

Small farmers in India don't have resources. One of the fears is that they'll fall prey to competition and end up in a tragic trap. What do you think?

Nothing can be more exploitative that the existing dalal system. Small farmers do not get credit from government banks. Only 35 per cent of farmers are getting bank loans. Tenant farmers do not get any facility at all. They depend on moneylenders for credit. The advantage of producers groups and linking them with the retails chains is that they give group guarantee and ensure minimum secured prices.