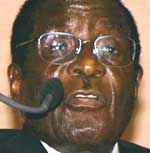 With its foreign relations in a mess due to continuing human rights accusations, Zimbabwe's diplomatic attempts seem to have taken a turn for the desperate. President Robert Mugabe is facing the ire of conservationists due to his recent wildlife-swapping deal with China. Under the agreement, Zimbabwe will send zebras, elephants and other animals to China in return for four rare Siberian tigers.

The cats, which would be the first of their kind in the country, are slated to be bred in captivity before being let loose into Zimbabwe's largest wildlife reserve. But critics point out that the southern African country's climate is not suited for Siberian tigers. Also, Zimbabwe hasn't been able to combat widespread wildlife abuse in the past.