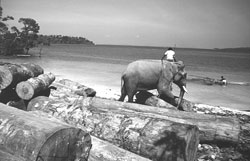 on what is being seen as a red-letter day for the greens, the Supreme Court (sc) banned the felling of trees in Andaman and Nicobar Islands. The apex court finally delivered its verdict earlier this month after a protracted legal battle that spawned a writ petition filed by environmental organisations.

The order comes as a boon for the native Onge community, which was driven to the brink of extinction due to large-scale destruction of forests. A three-member bench, comprising Chief Justice B N Kirpal, Justice Arijit Pasayat and Justice H K Sema, observed: "Andaman & Nicobar Islands is in (an) ecofragile area and, therefore, (its) ecodiversity has to be preserved."

Apart from the ban on felling trees, the recent order also bars the export of all wood-based products from the region. According to the directive, sawmill licences, too, will expire by March 31, 2003. Until then the mills will have to rely on existing timber reserves. The court has also directed that sand mining activities on the islands be scaled down by 33 per cent within the next five years. No regularisation of encroachments on forestland will now be possible, as the edict requires a month's eviction notice to be given to all pre-1978 settlers.

The sc order comes in the wake of the one-member commission's report submitted by Shekhar Singh of the Indian Institute of Public Administration (iipa). It is based on a writ petition filed by Pune-based non-governmental organisation (ngo) Kalpavriksh and Society for Andaman and Nicobar Ecology (sane), located in Port Blair, along with the Bombay Natural History Society (bnhs). The plea sought to protect the Onges. The petitioners were represented in court by lawyers of the New Delhi-based Environmental Justice Initiative (eji) and the Human Rights Law Network (hrln).

Sameer Acharya of sane says, "We are extremely happy with the order. For the Andaman authorities, it has come as a bolt from the blue." Pankaj Sekhsaria of Kalpavriksh is of the view that the order is a significant step towards the conservation of the islands' unique ecological system.

However, they are sceptical about how far the order will be implemented. "The Andaman forest corporation will take a while to start conservation efforts since it was playing a major role in exploiting forests," avers Ritwik Dutta of eji. "If the islands' powerful timber lobby moves court citing any problem with the order, it may spell trouble."

Though the court order comes as a respite for the natives and a shot in the arm for environmentalists, some major issues appear to have been overlooked. Primary among them is the livelihood of the people involved in the timber business and sand mining. Official figures show that there are around 30,000 workers in the sawmills alone and about 1.5 lakh dependents.

The onus for providing alternative sources of income to the affected groups is now placed with the government. But it is evident that the authorities are not yet geared up to offer suitable options to the displaced people. When contacted by Down To Earth, the governor of Andaman and Nicobar Islands, Narendra Nath Jha, was unavailable for comment. While the verdict gives a new lease of life to some, it could sound the death-knell for others.