Curbs on extraction of timber in Kerala's Wayanad district 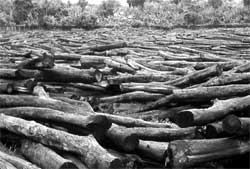 the Kerala High Court (hc) has directed the collector of Wayanad district to prevent extraction of timber from plantations in the region. The official has been told to ensure that various state departments do not abet the cutting and removal of trees from both forests and patta (title deed) land in Wayanad. Earlier, the court had allowed the divisional forest officer (dfo), south Wayanad, to remove 517.523 cubic metres of timber that had already been felled, in accordance with the Wayanad Colonisation Scheme.

The ruling came in response to a writ petition initiated suo motu on the basis of an anonymous letter, relating to the thinning of plantations, received by the hc. The petition has been referred to a division bench. It has been alleged that irregularities have taken place in the grant of patta . Title deeds are said to have been given to unauthorised occupants who have resorted to large-scale cutting and removal of valuable trees.

Notices are being issued to various officials of the area, asking them to show cause why the loss incurred by the state and environment because of their connivance with the illegal occupants should not be recovered from them. The hc also declined permission to the Timber Merchants' Association to remove lumber and other products collected from private or patta lands in Wayanad district.

The government pleader submitted that the state had taken steps for filing an appeal before the Land Reforms Apellate Tribunal challenging the order of the Land Tribunal in respect of the improprieties.

The court observed that patta had been issued to trespassers who could not be called tenants in any sense of the term. It held that until these aspects were considered, the plea of the traders could not be allowed.

The dfo was, however, permitted to carry on silviculture (forest management) work. This, in effect, means that thinning of plantations and extraction of timber as stipulated in the working plan for 2000-01 could be carried out. The judge ruled that this concession was being made since silviculture thinning was necessary for the healthy growth of trees and in view of the auction proposal of the timber so obtained.