Iron leads to the growth of algae, which absorb carbon dioxide 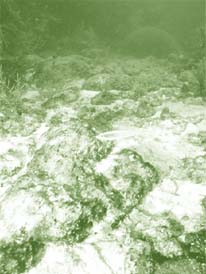 scientists have imitated a key process that might have triggered the beginning and end of the ice ages and also could solve the present day problem of carbon emissions. An international team of scientists working on the Southern Ocean Iron Release Experiment ( soiree ) has "fertilised" a part of the Southern Ocean, near New Zealand, with iron.

The scientists released eight tonnes of iron dust over a patch of ocean eight kilometres across, south of New Zealand. This led to a six-fold increase in algae plankton growth. Six weeks later, satellites could see the plankton covering thousand square kilometres of the ocean. "The growing algae sucked up 10 per cent of the carbon dioxide ( co 2 ) in the surface water, which was replaced by co 2 from the air," says Ed Abraham of the National Institute for Water and Atmospheric Research in New Zealand.

The experiment has led scientists to understand the process of the beginning and end of ice ages better, claims Andrew Watson of the University Of East Anglia in Norwich, the uk. He believes that the amount of iron reaching the Southern Ocean in dust from land could determine how much co 2 the oceans can absorb from the atmosphere.

"We think Patagonia, Argentina, may be crucial," says Watson. It was very dry during the last glacial period. Dust storms containing iron rained onto the ocean, stimulating algae growth that absorbed atmospheric co 2 and helped to maintain the global freeze. But at some point Patagonia became wetter. The iron rain ceased, ultimately causing a global rise in atmospheric co 2 . Modelling studies suggest that the loss of iron caused a 20 per cent rise in co 2 , says Watson, half of what was needed to end the glaciation.

The important question, which is now raging in the scientific community, is whether the Southern Ocean can be fertilised with iron to reduce global temperature? The soiree results suggests this could yield 'a modest increase' in the ocean's take-up of carbon, agrees Abraham. But all the researchers urge great caution. "It would be extremely inadvisable to even consider such a radical and potentially dangerous step," warns Cliff Law of Britain's Plymouth Marine Laboratory. Adding iron to the oceans on a large scale might disrupt the ocean's ecosystem and, therefore, is too dangerous to be considered a solution to global warming, the researchers say ( New Scientist , Vol 168, No 2260).