Women who might lose their ability to conceive - be it due to the inevitable menopause or a damage to their ovaries caused by radiation or chemothitapy - may still have a chance to become mothers. Removal of their ovaries and reimplanting apart of it later can allow women to remain fertile for their entire lives 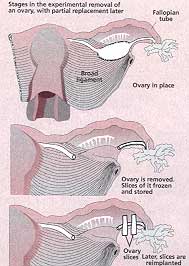 DEVELOPED by Roger Gosden of the University of Leeds in the UK, the process of restoring woman's fertility involves the removal of the ovaries before chemotherapy and radiation in cancer patients. A few slices of it are put in cold storage with the hope that the frozen pieces of this life-generating organ will function normally when it is replaced later.

The technique is deceptively simple. The ovary is removed surgically. It is skinned and slices a millimetre thick each, from its outer surface which bears eggs, are removed. These slices are processed with a chemical called dimethylsulfoxide to avoid damage that its freezing in liquid nitrogen is likely to cause.

Because frozen ovaries can remain in storage for decades, the woman can have her ovarian tissues back as soon as she is ready for it. The slices of the ovary are sewn onto the blood vessels that earlier fed the ovaries. The reimplanted tissue thrives on the blood and Arithin a few weeks, the tissue rounds up and forms a miniature ovary". After a few weeks the reconstituted ovary begins to ovulate, restoring the fertility of the patient.

For healthy women, the fascinating technique holds a promise to keep them fertile even after their menopause - a possibility that has created apprehension among experts that elderly women may not be fit enough to become mothers. "A crumbling scaffold riddled with osteoporosis is probably not suited to go through nine months of pregnancy," critiques Bernadine Healy of the College of Medicine, Ohio State University in the US.

Women with breast cancer or cancer of any part of the reproductive system are also rejected as potential recipients of the treatment. Researchers feel that restoring ovarian functions in these women could cause a recurrence of their cancer.

Whether this is just a theoretical proposition, or whether we are really going to benefit from this technique that has the, potential of turning back the biological clock, remains to be seen.

"We do believe that it will work. We were just not putting tissue into a bank and fingers," defends crossing our Gosden. But the success of the experiment on animals do not assure its success among women.