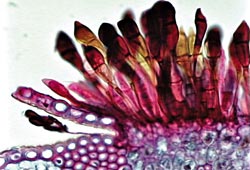 the more virulent the pathogen, the less fertile it is, Australian scientists have discovered, showing that there is often a genetic trade-off between ferocity and fecundity in fungi that infect plants.

Virulence is the ability of a pathogen, such as a fungus, to attack a host plant successfully. Fungi have virulence genes, and plants have resistance genes that counter chemicals produced by the virulence genes. If the plant does not recognise the virulence gene, then it gets infected. Peter Thrall from Australia-based Commonwealth Scientific & Industrial Research Organisation set out to study the genes in wild flax infected with rust fungus.

"A very strong relationship between the average resistance of a host population and the average virulence of the pathogen population was found," he says. During 7,200 tests, Thrall found a range of susceptibility amongst the plant population, as well as a range of virulence amongst pathogen population. Plants infected with highly virulent fungi had a large number of resistance genes. However, susceptible plants (those with low numbers of resistance genes) were found to be infected by fungi that were low in virulence. Why were the susceptible plants not infected by fungi having high virulence, the researchers wondered.

Thrall hypothesises that virulence affects the fertility of the fungi. He cultured some pathogens collected from the different plant populations and measured their spore production. He found that more virulent pathogens had lower spore production, therefore, they are not able to infect a large number of plants. They only infected plants having large number of resistance genes, leaving the rest of the job to be done by fungi having low virulence.

Thrall said such basic research on natural systems was important for understanding the behaviour of pathogens for agricultural purposes. "We typically go for the biggest guns in controlling disease," he says. "But if there is a trade-off, maybe it's important to maintain a reservoir of susceptible host plants to slow the evolution of more virulent pathogens."