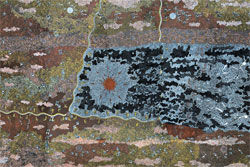 Commerce in aboriginal art in Australia has hit a low after years of rapid growth. An auction fell far short of pre-sale expectations as the global financial crisis seemed to be taking its toll. Auction house Sotheby’s Australia said the sale of aboriginal works at Sydney’s Museum of Contemporary Art on October 21 realized US $3.7 million, significantly lower than pre-sale estimates of between US $7.6 million and US $11 million. But there were bright spots with a kidney-shaped shield from north-east Queensland, collected by settler Robert Stewart, selling for US $84,000. The shield, dating to the 1870s, was sold for what is believed to be the highest price paid at the auction for an aboriginal artefact. Head of aboriginal art at Sotheby’s Australia, Tim Klingender, said the high price of the shield showed interest for historically significant works remained healthy after a boom period for Australian indigenous art. Australia’s indigenous art market has soared in recent years, underpinned by cashed-up mining and commodity investors, with a painting by the late indigenous artist Clifford Possum Tjapaltjarri selling last year for a record US $2.4 million. Ôûá