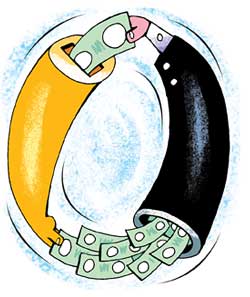 Activists of the International Campaign for Justice in Bhopal played a prank at the chemical export exhibition India Chem to expose the dealings of Dow Chemicals.

The activists issued an advertisement in the brochures of the exhibition in the name of Clean Chemistry Council, a fictitious European public relations firm, offering consultancy to corporations for improving their public image and evading legal liabilities "without changing the way they carried on their business".

Within the ad, the founder of the Clean Chemistry Council advised corporations to avoid taking part in any form of charity not directly linked to business gain. It cited Dow Chemical as a pioneer in this respect.

According to the ad, Dow's donation of Rs 1 crore to the Bhagwan Mahaveer Viklang Sahayata Samiti of Jaipur is ostensibly meant to supply artificial feet to amputees. The ad says the donation stymied activists seeking justice for Bhopal gas victims--Dow acquired Union Carbide, the company responsible for the Bhopal gas tragedy. "For every child crippled by Carbide's poison, there was an amputee benefiting from its profits," the ad said.

But the donation was not without strings. The artificial feet invented by P K Sethi were originally made of vulcanized rubber but Dow Chemical has substituted the construction material with polyurethane, one of its major products.

The ad sa id by introducing product substitution, Dow Chemical aims to capture the market for artificial feet for 1.25 million amputees in India.