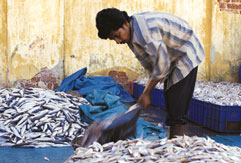 indian fishing and marine product processing sectors are protesting against a proposed free trade agreement between India and the Association of South East Asian Nations (asean) that excludes many fish varieties from its sensitive list.

This list, if finalised, would affect more than a million Indian processors of marine products. Free trade areas under this agreement which aims at zero-duty imports will be finalised by June this year.

The fishing sector fears that the agreement could sidetrack the Indian fishing sector by excluding many fish varieties from the sensitive list. In a tentative list, prepared for the first round of discussions on the free trade agreement, most varieties of Indian fish are under items that don't need protection. This, industry sources say, would allow unrestrained import of fish varieties into the country from Thailand, Philippines, Malaysia and Indonesia for processing.

The output efficiency of processing in India is better than that of southeast Asian countries. Indian industry cites this as the reason for marine sector mncs' interest in the Indian free trade zone. They fear that global hulks will take advantage of Indian expertise to process imported fish at low labour costs and export them at higher prices after value addition. This, as they say, could set off a price war in the domestic market as well.

At a recent meeting between the United Nations Conference on Trade and Development (unctad), the Marine Products Export Development Authority (mpeda) and the fishing sector in Kochi, fishing industry representatives asked for reconsideration of the items under the sensitive list.

unctad and mpeda have recently conducted a study that identifies more fish varieties that should be included in the sensitive list, based on the economic analysis of the present trade.