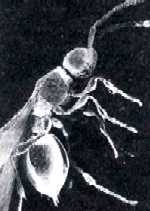 THE UZI fly, a dreaded parasite of the valuable silkworm, may soon have to look for other ways to survive because a hyperparasite has been discovered that breeds in its cocoon. Scientists at the Indian Institute of Chemical Technology (IICT) in Hyderabad have identified a wasp-like insect (Trichopria khandalus) that parasitises the cocoon of the uzi fly (Exorista sorbillans) and they advocate its use to fight the uzi fly, which is responsible for a loss of about 30 per cent of India's silk production.

Entomologist Kaiser Jamil, who heads the biology division at IICT, pointed out farmers cannot use pesticides against the uzi in silkworm-rearing rooms because it risks damaging the silk.

The uzi, particularly destructive in eastern India, has spread in the last 10 years to Karnataka and Andhra Pradesh. It strikes soon after the monsoon, when its population increases by as much as 50 per cent. The female uzi, attracted by chemicals produced by the silkworm, lays eggs in the soft tissue between the caterpillar's segments. The eggs are virtually glued to the caterpillar so that they do not fall off. After the eggs hatch, the uzi larvae bury themselves in the silkworm's body and gorge on it. The silkworm continues to live and even spins a cocoon, but after about 10 days inside the silkworm, the uzi larvae emerge and break the essential continuity of the silk thread.

Farmers in India have traditionally used, but with limited success, food traps or kerosene to keep uzi flies away. But Jamil's team found a hyperparasite in the Hindupur cocoon market in Rayalseema (AP) that attacks uzi pupae. The insect lays its eggs within the uzi pupae and about 15 days later each egg packet produces about 150 adult hyperparasites that feed on the uzi fly pupae. Efforts are being made to introduce the hyperparasite in silkworm hatcheries even though the farmers reacted initially with suspicion because they thought the scientists were introducing more uzi flies.

Tests have also shown the hyperparasite targets only the uzi and leaves other flies alone. "After a couple of initial releases to build up hyperparasite populations, intervention will no longer be necessary and Trichopria will take care of the uzi fly menace," Jamil assured.