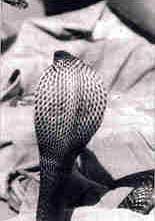 SNAKEBITES could spell death to countless victims had there been no antidotes available. But these commonly available antivenins also have their share of side effects, including strong allergic reactions that could even prove fatal. Thus, a new generation of antidotes to snakebite becomes significant. It promises faster treatment, smaller doses and a drastic reduction in side effects to hapless victims.

This neoteric antivenin developed by scientists at the Tennessee-based company Therapeutic Antibodies in the US, is all set to usher in a revolution in this field of medicine. Initially designed to save lives of people bitten by rat- tlesnakes in the US and Sri Lanka, and by vipers in Europe, this kinder version of antidote to snakebite shall be tailored in the near future, after the trials are over, to fight against other deadly types of snakebites also.

Till date, antidotes have been extracted from the blood of horses by Wyeth Ayerst company in Pennsylvania, us. Horses are inoculated with snake poison so that antibodies against the venom are formed in its blood. The blood is then drawn and the red blood cells removed to obtain the serum containing thousands of different anti- bodies. This antibody-rich serum is injected into the snakebite victim as an antidote.

The procedure is, however, laden with several shortcomings. Since only a few of these antibodies present in the antidote actually mop up the snake venom, patients stand a chance of suffering acute allergic reactions to the thousands of other antibodies in the serum. The dose has to be large because most of the antibodies in the serum are not specific for the venom, and the ones that actually target the venom molecules form a small proportion of the total quantity of antidote injected. The patient also suffers uneasiness for sever- al days as he develops what is called the serum sickness, a condition due to direct injection of serum into the human body.

Researchers at the Therapeutic Antibodies worked on the demerits of the existing antivenins and came out with a new, better version. The culprit that sparks off the allergic reaction to the antidote was identified as the structure of the antibody molecule. Making antivenins from the blood of inoculated sheep, the scientists aimed at eliminating the trouble- maker in the antidote. Serum was collected from inoculated sheep and was purified so that the resulting anti- dote contained antibodies against the venom alone.

The procedure adopted is deceptively simple. Papain, an enzyme, is used to separate the stem of each y-shaped antibody from its pair of arms. The stems are removed because they are redundant in venom neutralisation process and only hamper the patients recovery by triggering off an allergic reaction. Following this, a solution containing the arms of the antibodies, usually khown as fab fragments, is passed through a vertical glass column packed with beads of gelatinous substance Coated with venom.

Only those fab fragments that specifically target venom cling to the beads while the remaining antibodies simply flow out of the column. Later, the fab fragments trapped in the column are extracted, freeze-dried to a powder, and packed in single-dose vials ready for use. Since all the antibodies in the new antidote are functional, doses can be reduced to around 20 per cent of those required with the old antidote.

"With the old antivemn, all recipients suffered reactions while with the new version only 10 per cent got it," says Rick Dart of the Rocky Mountain Poison Center in Denver in Colarado. Significantly, of the 32 people treated with the new antivenin, most suffered no side effects, and none suffered the severe allergic reactions. So, next time you accidently step over a snake and get bitten by it, don't panic, the new friendly antidote is here.