Film review: Massacre of the innocents 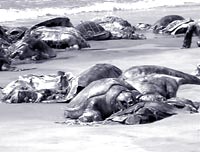 Come winter, at the time that they hit the beaches, Olive Ridley turtles also hit the headlines. One of the seven surviving species of sea turtles, thousands get slaughtered every year at Gahirmatha, Devi and Rushikulya in Orissa, where they come ashore to roost.

Shekar Dattatri of awareness, a Chennai-based ngo, portrays gory scenes of this annual massacre in a documentary titled The Killing Fields. The documentary blames the Orissa state government for illogically planting Casuarina trees as an anti-cyclone measure, thereby damaging the turtles' habitat. It also blames the intensive mechanised trawlers for not using the Turtle Excluder Device, which allows turtles to escape from fishing nets. It speaks of monumental official neglect.

But will the documentary be an effective tool to bring the story to the people? After all, it's only a tool, however evocative it may be. If it does not find an audience, one must ask whether it was really worth the effort.