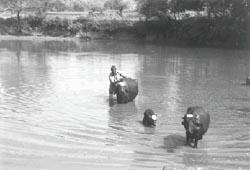 scientists at the Australia-based Commonwealth for Scientific and Industrial Research Organisation ( csiro) have developed a new technology that can clean polluted waterbodies. "The technique, known as the Filtration and Irrigated Cropping for Land Treatment and Effluent Reuse ( filter ), can solve the problems that are often associated with rural effluents -- high expenses while storing, salinisation of the reuse site, nutrient pollution and waterlogging," says Tapas Biswas, one of the soil scientists involved in the development of this technique.

Biswas says that the system can also treat industrial effluents that are contaminated by pesticides and heavy metals. Pollutants like pesticides get absorbed in the soil and later enter the foodchain. The technique offers opportunities to handle high volume rural effluents, in a sustainable manner, by reusing resources in agriculture and aquaculture production systems. It also protects the reuse site and its environment from the adverse impact that can accompany traditional land treatment systems.

The technique operates roughly on a fortnightly cycle. About 1,000-1,500 cubic metres of effluent is applied on each hectare of land. This is then followed by a one-to-two day post irrigation equilibration period and an 8-10 day draining period when the pump is turned on and the effluent slowly passes through the soil to 0.9-1.2 metre (m) deep agricultural drains to a collection sump. After the draining period, the pump is turned off for 1-2 days allowing the watertable to level.

The cycle is then repeated. The subsurface drainage system provides suitable soil conditions for crop growth, even during heavy rainfall and low evapotranspiration periods. During this process of the regulated flow of effluent, nutrients and other pollutants are absorbed on the surface of soil particles, to be taken by the crop and weeds, or lost through gaseous forms, thereby reducing nutrients in the drainage outflow.

The results of trials with pesticides at concentrations, showed that the filter can effectively reduce pesticide concentrations in outflow below New South Wales environment protection agency ( epa ) discharge limit. filter technique not only removes nutrients from wastewater, but also offers economic benefits through crop production to offset capital and running costs of the treatment system. csiro scientists say that a number of crops can be grown in filter plots.

Biswas says that the technique can be used in the states of Haryana, Punjab, Rajasthan, Gujarat, parts of Uttar Pradesh and Maharashtra where rural effluents is a major problem. He added that the technique can also work in highly industrial and polluted areas of Gujarat and Maharashtra. He, however, added that an investigation on quality of effluent and site characteristics were needed before implementing this technology. But given the large population like in a country like India and the amount of sewage disposed, is filter a cost-effective solution?

"Tests being conducted in China for the past two years have shown encouraging results. In fact, people in many areas in China are using filter drainage water for drinking purposes -- they find it cleaner than even groundwater." A similar project is being implemented at Wuqing, about 100 km north of Beijing, where sewage that flows through the agricultural lands is being treated, he adds.