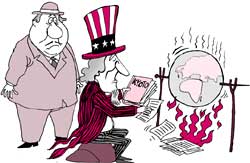 on february 16, the Kyoto Protocol to combat global warming became law, binding industrialised nations to reduce by 2012 their greenhouse gas (ghg) emissions to 5.2 per cent below the 1990 levels. A flexible trading mechanism for emissions provided for in the treaty also opens up opportunities for developing countries to secure investments in cleaner technologies. Meanwhile, the eu has gone a step further by opening up a debate on what needs to be done after 2012. In a paper released on February 9, the eu's executive arm -- the European Commission (ec) -- proposed involving even developing countries such as China and India in any future action.

un secretary-general Kofi Annan called the entry into force of the global treaty "a great stride forward in our struggle to confront one of the biggest challenges in the 21st century." But this struggle doesn't include the world's biggest ghgs emitter. The us pulled out of the treaty in 2001 as it felt meeting the emission targets would slow down its economy and render it uncompetitive vis-a-vis China and India, which are free from any emission reduction commitments.

Indian environment and forests minister A Raja emphasised the need for industrialised countries to reduce emissions. At an event in Delhi on February 17 to mark the coming into force of the Kyoto Protocol, he remarked, "Early and large decreases in emissions of greenhouse gases from the industrialised countries are necessary to reduce the urgency and scale of adaptation efforts." He also voiced the hope that the opportunities rapidly expanding clean energy markets presented, would induce countries such as the us to come on board.

By engaging China and India in negotiations for post-2012 emission targets, the eu, too, hopes to rope in the us. "We will continue to press hard for all of our international partners to come on board," said eu environment commissioner Stravos Dimas. eu's ultimate goal is to limit temperature increases to 2 c. The ec, however, doesn't propose any emission reduction targets for itself; it first wants to have discussions with other nations. The decision has been criticised. Calling it a tactical error, Mark Johnston of the international environmental organisation, Friends of the Earth, believes that it will make it harder for the eu to influence the us to change its stance.

The Indian ministry is still assessing the ec's paper and was unable to comment on it. But Pradipto Ghosh, secretary, Union ministry of environment and forests, said unlike the last time when industrialised countries negotiated targets amongst themselves, the targets for industrialised nations post-2012 would have to actively involve countries most affected by climate change.

The paper also suggests expanding the sectors covered for emission reductions to include aviation, maritime transport and forestry, giving a push to develop new climate-friendly technologies with long-term investments in energy, transport and building infrastructure, and implementing measures to increase the resilience of those vulnerable to climate change. These measures will be debated at the eu council's spring meeting this year where the eu will finalise its strategy for the international seminar on post-2012 action later in November.