Ayurvedic massage can reduce body's toxin levels by 58 per cent 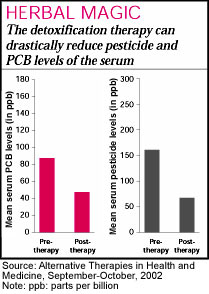 an ayurvedic detoxification procedure can reduce the body's pesticide and toxin levels by as much as 58 per cent, shows a study conducted by researchers from the Maharishi University of Management, usa. High levels of toxins can disrupt hormones and lead to cancer.

During the second round of tests, conducted over a period of 15 days, the researchers compared the pre and post treatment toxin serum levels of 15 people. The subjects were made to ingest warm, herb-rich liquid clarified butter. After this, they were given castor oil or herbal preparations for purging the butter. This was followed by a massage with herbal sesame oil and a herbal enema. The tests showed that there was a drastic reduction in serum toxin amount in all the subjects after the treatment.

"The treatment has the capability of completely removing the toxins from the body if the therapy is taken twice a year," says Robert E Herron, the lead author of the study. He asserts that modern medicine system does not have any scientifically verified method for removing fat-soluble toxins. "The study scientifically proves the efficacy of the treatment being used in India for centuries," says Gita Ramesh, managing director of Kairali Ayurvedic Health Resorts, New Delhi.

But there are voices of dissent. "There are a large number of fat-soluble substances in the body including essential ones such as vitamins and hormones. It is difficult to understand how the treatment distinguishes between the good and the bad lipids," says James F Riordan, deputy-director of the Massachusetts-based Centre for Biochemical and Biophysical Sciences and Medicine. The efficacy of the technique should be verified by some other group, feels Chandna Das, head of the department of biochemistry at the All India Institute of Medical Sciences, New Delhi.