About half the projects miss deadline

A number of power projects taken up under the first phase of the Jawaharlal Nehru National Solar Mission (JNNSM) are running behind schedule. A survey by Delhi non-profit Centre for Science and Environment shows many projects in the first batch of phase I, totalling 150 MW of Solar Photovoltaic (PV) power capacity, have missed their January 10, 2012 deadline.

Thirty projects of 5 MW capacity each were auctioned in November 2010 and contracts had been signed on January 10, 2011 with a 12 month deadline. The projects are to receive between Rs 11-12 per unit power for 25 years of operation and are expected to provide about 6,570 MWh per year per plant.

In October 2011, K S Popli, director technical of the Indian Renewable Energy Development Agency (IREDA) had told CSE that about 12 of the PV projects would most likely miss their deadline.

Alex Spectrum Limited: Joy Roy, working with the solar department of the company,  informed CSE on January 10 that “the plant (in Bikaner district) will take another 10 to 20 days to be commissioned”. No reason was offered. Alex Spectrum had begun construction of the solar plant after October 2011, according to Rajasthan Renewable Energy Corporation (RREC). 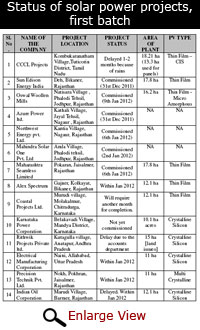 Coastal projects limited: According to a senior manager of the company, which has a project in Karnataka, the plant will take another month “due to certain aspects that are currently being discussed with NTPC Vidyut Vyapar Nigam (NVVN, the nodal agency for the solar projects)".

Precision Technik Ltd: Ashu Gupta, president of business operations for the company which has its project in Rajasthan, said the plant is facing certain land problems which are causing a delay in commissioning. “The plot for the plant had been marked at the wrong spot by local residents. The equipment and everything else are in place. The plant work should be more or less complete by January-end 2012, and major part of it will be commissioned,” Gupta said. Asked about land requirement for the project, he said, “We are using our own poly-crystalline silicon panels which should ideally take up 2.2 hectares (ha) of land per MW. But since the terrain is uneven and we are not cutting down any tree on the plot, so as to avoid sand dunes, the plant has taken extra 0.8 ha.”

CCCL Projects: According to a project manager with the company which has project in Tuticorin district in Tamil Nadu, the plant was delayed due to rains during August and then again in November. “Even a 15 minute shower halts work for about three days as the soil takes really long to harden,” he said.

There is a set procedure for commissioning a completed plant. First the state government concerned is informed. “Then an official team consisting of a representative each from RREC, Jodhpur Distribution Committee and Rajasthan Rajya Vidyut Prasaran Nigam Limited (RVPN), is sent to inspect the plant and prepare a commissioning report. Once the report is approved, the plant is officially commissioned,” said Surendra Mathur, project officer with the Public Information Unit of Jodhpur RREC.