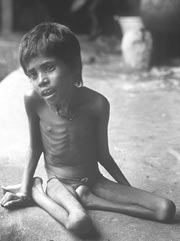 Tens of millions of children in developing countries do not have access to food, water, education and sanitation, according to a report prepared by the Townsend Centre for International Poverty Research at the University of Bristol, uk, for the United Nations Children's Fund (unicef).

This is the first time child poverty in the developing world has been scientifically measured. The report analysed lives of more than 1.2 million children from 46 of the world's poorest countries, and its findings were grim. A third of all children surveyed lived in dwellings with more than five people to a room. A similar proportion had no kind of toilet facility, and one in five did not have access to safe drinking water. More than one in ten children aged seven to eighteen had never been to school, and one in seven was severely malnourished. The report apprehended that future international targets to reduce child poverty are going to be missed as a result of cuts in aid budgets to poor nations. The unicef report also feared that as developing countries lost income from their own markets, they are more likely to cut down on social services, forcing the poor to pay for health and education.