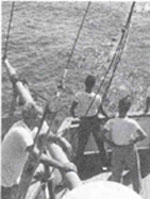 The country's deep sea fishing policy has run into troubled waters. Acceding to protests by fisherfolk against forays by multinational companies into the Indian seas, the government has frozen the issuing of new licences to foreign companies pending a review of the policy, which was announced in 1991.

The decision comes on the heels of an agreement on creation of the Indian Ocean Tuna Commission, an intergovernmental accord to ensure sustainable tuna catch.

Union minister of food processing industries Tarun Gogoi announced on January 2 that a review committee would be constituted within a fortnight to take a fresh look at the fishing policy. Meanwhile, the present fleet of deep sea fishing ships would be allowed to operate unrestricted.

Gogoi acknowledged that an unbridled increase in mechanised trawlers in the past few years had affected the catch of traditional fisherfolk and regulatory measures were required.

In what seems to be a related move, the Union Cabinet recently approved India's entry as a founding member of the Indian Ocean Tuna Commission. The commission will comprise all countries bordering the Indian ocean and others such as the European Economic Union countries that also fish for tuna in the area.