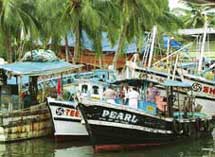 The ban is applicable from June 10 to August 15 each year in Gujarat, Maharashtra, Goa, Karnataka and Kerala.

The sc had issued the order as an interim relief in response to a petition filed by a Goa-based ngo, the Goa Environment Federation. While Gujarat and Maharashtra favour the ban, the other states are not so enthusiastic.

The Kerala fisheries minister, S Sarma, felt Kerala did not need the sc ban as the state had been observing a 45-day trawling ban for the last 19 years generally between June 15 to July 30 (see 'Protecting bounty', Down To Earth, July 31, 2006).The sc order will extend Kerala's ban period from July to August, which, he says, is illogical since Kerala has monsoons from June to July.

The Kerala ban is applicable only on trawlers, while the sc order will prevent all mechanised crafts that use engines above 10 horse power from fishing during the ban. This will hit traditional fisherfolk very hard since almost 93 per cent of the traditional sector is mechanised, using engines with 25 to 150 horse power.

Conversely, traditional fisherfolk have always asked for a 67-day ban. "While we welcome the 67-day ban, we just cannot agree with the restriction on crafts with more than 10 horse power," says Charles George, president of the Kerala Matsya Thozhilali Aikya Vedi, a Kerala-based fisherfolk union. "The sc order is a double-edged sword," he adds, wanting the state to take out an ordinance followed by a law so that traditional fisherfolk with mechanised boats can fish. The Kerala Swathantra Matsya Thozhilali Federation, a Kerala-based federation of fisherfolk, has condemned the government decision to file a petition. Instead they asked the state and boat owners to implement welfare schemes for fisherfolk employed on trawlers, who will not be able to fish during the ban.