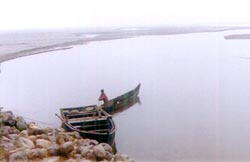 for fisherfolk and traders in Jalpaiguri district of West Bengal, catching fish is child's play, thanks to harmful pesticides such as endosulfan. The fisherfolk contaminate the upper reaches of rivers such as the Teesta and the Jaldhaka with the organochlorine pesticide. This activity is carried out mainly around the Mainaguri and Dhupguri blocks. The poisoned fish are then caught downstream and sold to make a quick buck.

This alarming fact was unearthed during a recent study under the Jalpaiguri-based North Bengal Terai Development Project (nbtdp). Holland is assisting West Bengal in the project. It has been found that the fishing communities use endosulfan, sold under the brand name Thiodin, in the rivers.

The nbtdp team collected 13 samples of river water. Two of these, taken in early January 2003, contained 0.01 parts per million (ppm) of endosulfan. "Pesticide levels in rivers are likely to rise from February to April. This is because more pesticides will be used during the sowing season and the April rains will carry them to the rivers," feels Wouter Schaap, a researcher with nbtdp. The team had conducted a study, in April 1995 too, which detected higher quantities of the chemical (up to 3.70 ppm) in surface waterbodies.

Endosulfan has been termed as a "highly hazardous" pesticide by the us Environmental Protection Agency. There are curbs on its use in 20 countries. In Kerala, too, the pesticide was banned after major deformities were found among the people of certain villages in Kasaragod district (see: July 15, 2002).

Though the regional office of the state fisheries department is aware of the fish poisoning, no action has been taken yet. "In the absence of information about the culprits it is tough for us to take action," says Ramesh Biswas, fishery extension officer, Mainaguri block. The villagers are also worried as their cattle consume the same water.

The state fisheries department has listed more than 50 species that are either extinct or teetering on the brink. Against this backdrop, the use of endo sulfan will only hasten their end.