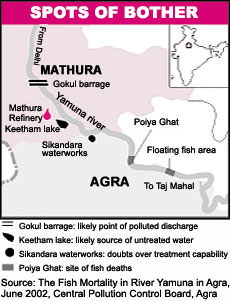 on june 13, death deluged the banks of Yamuna river in Agra. The Sikandara-Taj Mahal area along the water body was covered with thousands of dead and dying fish. Less than a week later, reports of more fish deaths poured in from Bateshwar -- within 78 kilometres (km) of the stretch that was affected earlier.

Officials have offered several explanations for the incidents: from ascribing them to chemical pollution in the river which led to a sudden plunge in the dissolved oxygen (do) content of water, to holding a lethal combination of excessive sedimentation and discharge responsible. But none of them appears convincing (see table: Post-mortem).

And even as the authorities are groping for answers, the Central Pollution Control Board (cpcb) has stated that it does not rule out a recurrence of such episodes unless immediate remedial action is taken.
The ghastly sight that greeted the residents of Agra on the morning of June 13 along the Yamuna near Poiya Ghat (see map: Spots of bother) sent a wave of panic among them. "Not an inch of the river's bank was visible. There were dead fish strewn all around," said Pancham Singh of Bahadurpur village.

Fearing that the water body had been poisoned, villagers prevented their animals from going near it. Civic bodies awakened to the situation only when the pump operators of local waterworks discovered that their intake was brimming over with dead fish.

The district magistrate convened a meeting where it was decided to stop water supply to the city. A slew of damage control measures were taken. A committee was constituted under the chief executive officer of Agra Municipal Corporation (amc) to probe the matter; the cpcb collected water samples for bioassay and toxicity tests (it has since completed the analysis and concluded that the samples were free of any toxic or poisonous substance); a sample of the dead fish was also sent to Industrial Toxicology Research Centre (itrc), Lucknow, and the forensic laboratory in Agra. As an immediate step, 1,000 cubic metres per second (cusecs) of water was released from Gokul barrage in Mathura -- situated 50 km upstream -- to dilute the pollutants in the river.

However, after the Bateshwar incident residents of Agra are sceptical about the quality of drinking water being provided. Consequently, though supply was resumed three days after the fish deaths occurred, residents are still wary of using municipal water.
All government agencies that are involved in managing the Yamuna have put forward different hypotheses explaining the fish deaths, but none of them is willing to accept responsibility.

inquiry committee's deductions: "It seems an accidental water discharge from Gokul barrage carried sediments and pollutants, which decreased the oxygen level in the water," opines Manoj Kumar Singh, chief executive officer of amc and head of the inquiry committee. "This phenomenon choked the fish," he adds. To lend credence to this theory, Manoj Singh packs it with facts and figures. Firstly, the do level recorded by the Uttar Pradesh Pollution Control Board (uppcb) and the Agra office of the Central Water Commission on the day of incident was abysmally low {1.7 milligrammes per litre (mg/l) near Agra waterworks, as against more than 3 mg/l which is vital for fish survival}. And secondly, the water level was found to be at least one foot higher than normal on that day.

Data notwithstanding, the panel's premise on low do levels is on shaky ground. This is because several tortoises were also found dead with the fish. "If the river's do level had plunged, the tortoises had the option of inhaling oxygen outside water too. Why didn't they do so?" asks Brij Khandelwal of Blue Yamuna Forum, a non-governmental organisation. Though district authorities feigned ignorance about the tortoise deaths, cpcb has accepted them.

Another angle that the panel is investigating is discharge from Keetham lake, 28 km upstream of Agra. The committee does not rule out Mathura Refinery lifting raw water directly from the Mathura canal -- which is the feeder source for the lake -- and discharging polluted water from the lake into the river. These charges were, however, refuted and dubbed as baseless by Satish Tandon, head of public relations, Mathura Refinery.

The probe panel does not negate the possibility of chemical poisoning. But this inference does not hold water in the wake of the cpcb toxicity report findings.

cpcb report: The board has found that though the lowest do content as well as the least flow of water in Agra is recorded in June, this year the discharge level has hit a new low. As compared to 35.29 cusecs last year on June 13, only 5.97 cusecs has been recorded in 2002 on the same day. "It probably happens due to intermittent discharge from Gokul barrage," says Dipankar Saha of cpcb, Agra. It is possible, therefore, that the fish may have been exposed to the pollutants flowing with the discharged water between Sikandara and Agra waterworks, states the report. As the riverbed is used for agriculture, including application of manure and pesticides, organic load is added to the river. The report construes that this, coupled with an increase in discharge, could have caused inundation and churning of the riverbed. This in turn could have led to do depletion and resulted in the suffocation of fish.

But there are two weak links which the cpcb acknowledges candidly: as both sedimentation and discharge are continuous processes, why did the kill occur on that particular day? And if lack of oxygen was the cause of the fatalities, why did tortoises also die? "The exact number is not known but some tortoises were found dead," concedes board official R M Bharadwaj, who conducted field investigations in Agra and Bateshwar. "The issue definitely needs further investigation," he adds.

The cpcb differs with the probe panel on the Gokul barrage discharge issue. It says that water was discharged from the barrage but feels this may not have caused fish mortality due to greater travel time, which results in natural re-oxygenation. In addition to this it avers that higher water discharge could actually have diluted toxicity levels, if any. The board found the quality of water of the barrage to be satisfactory.

other viewpoints: The irrigation department of Agra that maintains the Gokul barrage and Keetham lake denies allegations of accidental discharge of water. "This is not possible because the barrage itself gets very less water from upstream," says Hari Shankar Sharma, who is in charge of Gokul barrage. A K Singh, who manages Keetham lake, concurs. "We did not release water from the lake. In fact, the water level is below normal," he points out.

The uppcb has denied any accidental release of water into the river between Sikandara and Agra waterworks. "It is clear that water was discharged but we are not sure from where," says A K Tiwari, regional officer, uppcb, Agra.

In the meantime, the cpcb has listed out various safeguards for the future. It has stipulated that a minimum flow of water be maintained in the river through regular discharge instead of intermittent release. The board has issued directions to the up government to clean the riverbed and remove algae, which it suspects are playing a major role in do depletion at night. "The state government has also been asked to improve their sewage treatment facilities," says Bharadwaj. Even as most government agencies seem out of their depth, it remains to be seen whether the itrc report -- which is awaited -- can shed light on the matter.