Tap water norms on the anvil 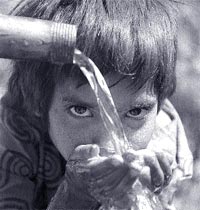 the ordinary water that you consume could soon cease to be a cocktail of contaminants. The Union ministry of health and family welfare (mohfw) is planning to bring drinking water under the purview of the Prevention of Food Adulteration Act (pfa), 1954.

Union health minister Sushma Swaraj recently declared that an ordinance would be brought in to categorise drinking water as 'food' in the pfa. Swaraj underscored the need for regulation, conceding that there are no drinking water norms in the country. It was the Centre for Science and Environment that brought the matter to the public's notice (see: 'We found to our horror...', August 15, 2003).

Currently, issues pertaining to drinking water are dealt with by the Union ministry of urban development and poverty alleviation. As per this arrangement, the Central Public Health and Environmental Engineering Organisation (cpheeo) lays down 'guidelines' for drinking water. In addition to this, there are drinking water quality standards prescribed by the World Health Organization and Bureau of Indian Standards. But these are not mandatory.

The consumers have welcomed the government's decision. For their part, civic bodies too have endorsed the move. They, however, put some pertinent posers. "What can a municipality do if groundwater itself is polluted? In West Bengal, arsenic in groundwater is a major problem," points out G P Sen, chief engineer (water supply), Kolkata Metropolitan Development Agency.