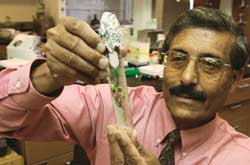 leguminous plants enrich the soil because their roots produce nitrogen-fixing nodules in the presence of rhizobium bacteria. But recently, a team of scientists managed to trigger nodule formation in legumes without the bacteria. The discovery opens up the possibility of inducing nodule formation even in non-leguminous crops (such as wheat and rice), which could revolutionise global farming and food production by dramatically reducing dependence on nitrogen fertilisers.

Nodule formation in legumes is triggered by a molecule called the Nod factor present in the rhizobium bacteria. The Nod factor activates a gene called dmi3. Interestingly, a similar gene is found in non-leguminous plants -- for example, the gene cca mk in the lily, Lilium longiflorum.

The scientists from uk's John Innes Centre (jic) and Washington State University in the us, used the legume Medicago truncatula (common name -- barrel medic) for their experiments. They found that when they used cca mk to replace dmi3 in M truncatula, the plant was still able to develop nodules in the presence of nitrogen-fixing bacteria.

The researchers then created a mutant version of cca mk by knocking off a part of the gene and introducing the remainder into M truncatula. The plant now produced nodules even in the absence of the rhizobium bacteria. This led the scientists to conclude that the part of cca mk removed was inhibiting nodule formation. "This is an important step towards transferring nodulation, and possibly nitrogen fixation, to non-legume crops which could reduce the need for inorganic fertilisers," according to the study published in Nature (Vol 441, No 7097, June 29, 2006). In a similar study published in the same issue of Nature, an international team of scientists was able to trigger nodulation in a type of lotus, Lotus japonicus, using cca mk.

Nitrogen is a crucial plant nutrient, which legumes fix naturally. For other crops, use of nitrogen fertilisers is common. These fertilisers supply nitrogen in the form of ammonia, which is synthesised by combining atmospheric nitrogen with hydrogen obtained from petroleum products. The process requires high temperature and pressure, and, therefore, consumes a great deal of energy. Production of nitrogen fertilisers accounts for about half the fossil fuel used in agriculture. 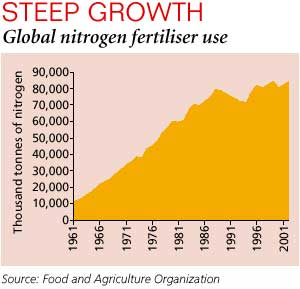 The use of nitrogen fertilisers has increased almost nine times since the 1960s (see graph: Steep growth). India is the third largest consumer of fertilisers. On an average, 100 kg of nitrogen fertilisers (at a subsidised cost of Rs 5 per kg) are consumed per hectare in the country, requiring huge investments. The demand is expected to increase by 25 per cent in the next five years.

But with the cost of fossil fuels rising steeply in recent times, experts believe that nitrogen fertiliser production will fail to remain cost-effective, hitting the small farmers the most. On the other hand, rampant use of nitrogen fertilisers can be risky. Excess nitrogen can wreak havoc on an ecosystem by affecting the population and diversity of species. It can also induce eutrophication in aquatic habitats.

These problems can be addressed if nodule formation can be induced in crops. However, some scientists say it may not be easy to accomplish.

"The process of biological nitrogen fixation is particularly sensitive to adverse environmental conditions such as drought," says K P Singh of the Banaras Hindu University in Uttar Pradesh. In the face of climate change and frequent drought conditions, complete dependence on biological nitrogen fixing may sharply reduce crop production. But Bachettira Poovaiah, one of the authors of the paper, argues, "It is not about a complete switch-over, it is about reducing dependency on synthetic fertilisers. If major field crops such as wheat and corn can fix nitrogen from the atmosphere, it will help reduce burden on farmers and also preserve