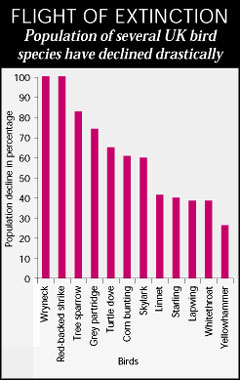 it might not be a million dollar question, but is worth us $7,600. A newspaper is offering the amount to anyone who can explain why, over the past almost 30 years, Britain's rural sparrow population has declined by about 60 per cent. For many experts, clues to this puzzle lie in intensive mechanised farmland practices.

In Europe, farmlands support more bird species of conservation concern than any other habitat. During the last quarter of the 20th century, population of many European farmland birds have collapsed, and in some countries, the declines have been very dramatic. Experts attribute this collapse to the unprecedented changes that have taken place in the way farmlands are managed. Farming has become increasingly mechanised and reliant upon high yield crops. Due to this, usage of pesticides, fungicides and fertilisers has increased, hedges have been lost, wetlands have been drained, hay meadows have been replaced with silage grass, and habitat diversity has declined with field size being increased.
Of all the species that have suffered due to these changes, none illustrates the complexity of the problem better than the skylark. A research by the London-based Royal Society for the Protection of Birds (rspb) shows that the use of fungicides has been one of the major causes for their decline. It has allowed the autumn sowing of cereals, which has led to lack of crop stubble during the autumn season. Farmland birds feed on this stubble left in fields between the summer harvest and spring planting. But the trend towards autumn planting has cut off this food source, thereby leading to the starvation of a large number of birds.

Another way by which autumn planting has affected bird population is the taller and denser crops during this season. Birds generally avoid building nests in taller and denser crops. Therefore, during the autumn season when crops are taller and denser as compared to spring, birds tend to build their nests adjacent to a tramline -- bare unplanted tractor tracks that ensure no parts of the crop are left unsprayed. But nests adjacent to tramlines are more vulnerable to predators. During their study, the rspb researchers found that a pair of skylarks nesting in spring-sown cereals are able to produce three times more chicks than skylarks nesting in autumn-sown cereals. This difference is sufficient to explain the decline of skylarks in the uk, assert experts.

Changes in cereal management have caused declines in skylark populations, but what has caused these? The answer is high level of political control faced by European agricultural industry. After the austerity of the World War years, all European member states became bound to the Common Agriculture Policy (cap), which has lead to the removal of protective tariffs and allowed the free flow of labour, capital and food. cap was designed on the principle that poverty among food producers and strategic food shortages could be addressed by increasing production. But a cap-induced high agricultural productivity demanded management changes that have devastated Europe's farmland bird population.

According to the rspb researchers, collapse of European farmland bird populations in many countries demonstrates the importance of extensive monitoring and taking a number of remedial measures. In fact, the British government is planning to start an environmental scheme for farmlands, aiming to compensate farmers for making changes to benefit wildlife. These changes would include leaving field margins fallow or delaying planting until spring. Conservationists are optimistic that this will help to reverse the decline. "There's a research base that tells us what needs to be done. Farmers are keen to do the work if the incentives are there, and there's the political will to do so," says Darren Moorcroft, agricultural officer of rspb.