BENGALURU residents look forward to December 2011, when the new water treatment plant at T K Halli would deliver 500 million litres of potable water every day. This would increase each person’s daily water allowance in the city by 25 litres. Bengaluru Water Supply and Sewerage Board (BWSSB) fast-tracked the plant by 12 months; this was possible because of Dissolved Air Flotation (DAF) system, patent of French company Degremont, the water and waste water technologies leader that will build and operate the facility.

A first of its kind installation in India, DAF is used for the primary stage removal of suspended particles in water; it is distinctly different from conventional methods of reducing turbidity. Conventional methods involve chemical coagulation to group particles into flocs. These flocs, or particles of greater density, are given time to settle down and then removed. In a DAF system, tiny air bubbles are injected to the water; particles adhere to the bubbles and float to the surface, forming a layer of froth that is removed intermittently (See schematic and explanation). Chemicals are needed in the DAF system only when the water is highly turbid. But since that is not the case in Bengaluru, DAF is particularly suited here.

The conventional method, in fact, is not able to take advantage of the lowturbidity in the area’s water because coagulants are necessary for flocculation of suspended particles. The five-year data shows that turbidity in the raw water remains well under 10 nephelometric turbidity units (NTU) for seven to eight months in a year. This will make it possible for the plant to run in what is called direct filtration mode, where water is taken directly to the flotation tank, bypassing the clarifiers thereby reducing chemical and electrical consumption. This will also reduce costs.

“During monsoon water turbidity is likely to go up to around 100 NTU,” said R Vasudevan, chief engineer, BWSSB. Typically, turbidity of up to 100-150 NTU can be handled by increasing the chemical dose, mainly polyelectrolyte that acts as an efficient binder. The clarification rate of Degremont’s DAF unit (40,000 litres per square metre per hour) is more than 10 times that of conventional methods. Thus large quantities of water can be cleaned with smaller sedimentation tanks. This saves space— the area footprint of AquaDAF is four to five times smaller.

David Johnstone, international public health consultant affiliated to Oxford University in the UK said, “DAF is a three-decade-old established process for potable water and can save a large area as compared to settlement tanks.” The construction site for the T K Halli waterworks is undulating and located upon rocky strata; it is, therefore, more suited to DAF. A small footprint technology such as DAF would require less civil works and therefore lower the cost.

“AquaDAF is now acceptable to Indian clients for implementation in large capacity projects. This was not the case when the first phase of T K Halli water treatment plant was conceived over 10 years ago,” said Vipul Goyal, general manager of Degremont’s technical division. This also demonstrates Indian municipal clients are opening up to contemporary water treatment technologies, he added.

Since DAF clarifies the water by removing the floating froth as opposed to settled sludge, the technology also tackles the problem of algae. Low to moderately turbid water has extremely low density particles and has a tendency to support algal blooms. “Algae can choke filters in the next stage of treatment,” said Goyal. This is tricky and is not effectively dealt with by conventional settling systems, he added. BWSSB has signed a Rs 236-crore, seven-year contract with Degremont. 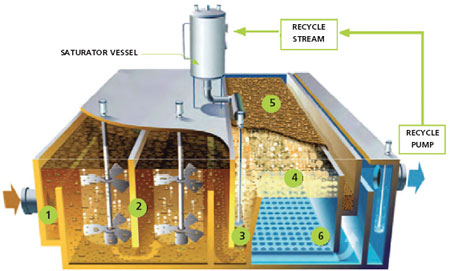