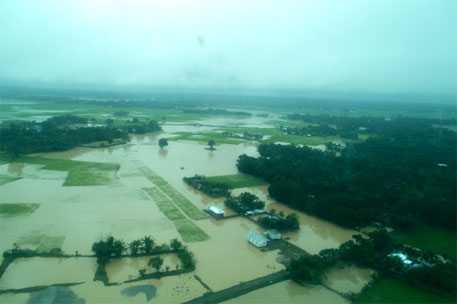 Assam’s capital, Guwahati city, which received heavy rains on Monday and Tuesday is in the grip of a severe flood.

According to a press communication issued by the office of Assam Chief Minister Tarun Gogoi, the city received 135 mm rainfall between Monday night and Tuesday morning; this was much higher than the 60 mm rainfall which the city received during the devastating floods of June 25 this year. As a result of the flood and consequent landslide, four people lost their lives; one of them by electrocution.

BJP member of Legislative Assembly, Jadav Chandra Deka, who resides at Anil Nagar, one of the worst flood-affected areas in the Guwahati city, had a lucky escape. He built a raft for himself with a plantain tree in his backyard and rowed to a safe area on Tuesday. Speaking to Down to Earth, Deka said that only one raft was pushed into rescue operation by the district administration and it was impossible to wait for rescue.

But there were others who did not escape the flood fury. As many as 35 people in Guwahati, southern Assam districts of Goalpara and Dhubri, and the Garo hills in the neighbouring state of Meghalaya have been killed in the floods; over 100,000 people have been displaced and infrastructure worth several crores of rupees have been damaged. 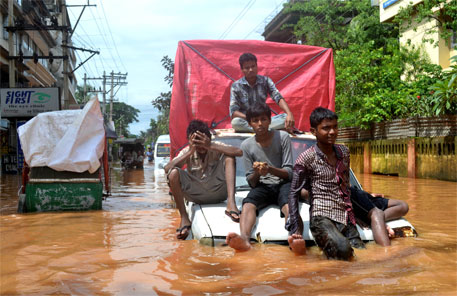 Warning unheeded in Meghalaya
The Meghalaya government said that it issued alerts regarding a possible flood disaster three days prior to the disaster.

“An alert was issued, but probably no one had imagined the damage would be to this extent,” said Meghlaya Chief Minister Mukul Sangma.
Garo hills are the worst affected with 27 people losing their lives in the region.

Chief Minister Sangma who made an aerial survey of the affected areas on Tuesday said that the devastation and quantum of damage is unprecedented.

According to officials of the Public Works Department of the Meghalaya government, landslides have occurred at several places; at least ten wooden bridges have been washed away and three concrete bridges have been severely damaged.

Speaking to media, Sangma said that the quantum of damage is unprecedented. He also said that he has instructed all the district administration officials to gather village-wise data and file an interim report at the earliest possible. Sangma said 80 per cent crop in North Garo Hills, 60 per cent in South West and West Garo Hills are assessed to have been destroyed.

“Preliminary data show that damages to road infrastructure is about Rs 300 crore, loss of crops and other infrastructure would add up to more than Rs 1,000 crore. All assessments are being done in Garo hills and West Khasi Hills,” said Sangma.

“After financial review of the losses, we will write to the Centre for necessary help and assistance for rebuilding of infrastructure,” the chief minister added.

On being asked about the cause for floods, the chief minister said it was coudburst. “There was no water in the upper ridges of the river which caused the flooding, and suddenly the flood occurred. So, this points at cloud burst,” he added.

Meghalaya’s runoff floods Assam
As a result of the flood water gushing down from Meghalaya, several districts in adjoining Assam have been affected. Officials of the Assam State Disaster Management Authority (ASDMA) said flooding in Meghalaya has severely affected many areas in four districts — Goalpara, Dhubri, Kamrup and Kamrup (metro).

According to reports, over 100 revenue villages in these districts have been severely affected. Eight deaths have been reported from villages in the Goalpara district itself, and many villages have been submerged as the water level of three major rivers — Dudhnoi, Krishnai and Bolbala—are above the danger mark.

Goalpara deputy commissioner Preetom Saikia said that rescue operations are on, and the National Disaster Response Force (NDRF) has pressed 11 search and rescue teams into service.

“The situation is presently under control and will improve, provided there is no further rainfall,” said Saikia.

Altogether, 78 relief camps have been set up to provide shelter to flood-hit people in Goalpara.

Commandant of NDRF, Alok Kumar Singh, said he is keeping a very close watch on other affected areas, and that remaining search-and-rescue teams have been activated for effective and proactive response.

In spite of rains ceasing, Kamrup metro district administration has admitted that its problems are far from over.

“On one hand Guwahati got heavy rains. On the other hand there has been very heavy run-off of water from the adjoining hills of Meghalaya,” deputy commissioner of Kamrup Metro district, M Angamuthu said.

The deputy commissioner said that heavy rains in Meghalaya have contributed to the rising water level in the Basistha rivulet on the outskirts of the city, and added that this might cause flooding in some areas in the city.

“As the nature’s fury subsides, we would take preventive measures in Basistha area as well,” he added.

Gogoi, who has a telephonic conversation with Union Home Minister Rajnath Singh on Wednesday morning, apprised the latter about the steps initiated by the state government to rescue the marooned people in the flood-hit areas.