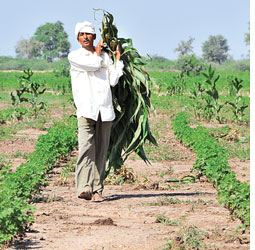 Saurashtra was flooded since rainwater could not drain

THE state highway between Viramgam and Surendranagar towns in Gujarat presents a stark contrast. On one side is a carpet of green fields for miles, and on the other, decaying jowar and cotton crops, at places submerged in water. The 60 km highway itself remained under water for three days in mid-September.

The contrast makes clear the nature of floods in Gujarat. There are no rivers near inundated areas. After Surat floods in 2006, this is the second time that a major flood has happened in the state due to blocking of drainage paths. Most affected areas are in the peninsular Saurashtra region. In two days, September 17-18, it rained as much in Surendranagar district as it rains in a year there. "It rained more than 40 inches in 30 hours, leading to flooding. There was no time for water to recede," said J D Bhad, collector of Surendranagar.

The damage was heavy.Over a hundred thousand hectares of agricultural land was damaged by water-logging. About two thousand houses have collapsed completely and 13,000 others are partially damaged. Yudhveer Jadhav, an elder member of Adalsar village in Surendranagar, estimates that in his Lakhtar taluka, cotton crops worth Rs 40 crore have been damaged.

Jadhav's family itself had sown cotton in 4 hectares (ha). "We invested whatever we could in the crop and were waiting for it to grow," he said. But then came floods. About 70 per cent of the crops and 20 per cent land in Adalsar are ruined. Jadhav has calmly accepted his fate. "It is a natural disaster, one cannot call it the fault of the government," he said. But he does agree that had it not been for the raised highways and canals of the Sardar Sarovar Narmada Project, the damage could have been lesser.

In nearby Limbadi taluka, Kantibhai Bhatana also lost half his crops. "Two acres (a little less than a hectare) of my land near the road is completely damaged and it will take years before anything grows on it. The sand and rocks that came with water will have to be removed manually and new soil will have to be spread," he said. The contrast was visible here as well. The crop in his field across the road, connecting Surendranagar town and Limbadi, was standing tall and healthy. "The rainfall did not affect that side much because the water receded quickly. On this side the water was blocked by the road," he said.

Survey for compensation would take "some time", said Bhad.

On the edge of Saurashtra in Little Rann of Kutch, salt workers called Agariyas were stuck in more than seven feet of water. Their newly installed machinery for salt production was submerged.

The Rann is a low-lying area that remains submerged for four months till August. In September the Agariyas migrate to the Little Rann of Kutch to produce salt. "The problem aggravated because there are no raised areas in the Rann where they could take refuge," said Bharat Patel, who works with Agariya Hitrakshak Manch, an advocacy group for the rights of salt workers. Bodies of five fishermen were found in Little Rann of Kutch, he added. The nearby 42 sq km Nal Sarovar bird sanctuary was also under water.


The damage due to the Narmada canal network in Saurashtra and to the network itself was huge. A yet-to-be-commissioned pump house in Lakhtar, the second largest in Asia, gave way under high water pressure. The canal breached at three places, aggravating the flood.

The Saurashtra branch canal of the Narmada project--that branches off from the main canal at Kadi in Mehsana district and runs across the Saurashtra region--is designed to hold a flow of about 400 cubic metres per second (cumecs), but the downpour led to a flow of over 600 cumecs. This was one of the reasons for breaches.

There were also reports of villagers breaching the high embankment of the canal as water was being held in their village. "This is because at places the ground level is lower than the base of the canal," said an official of the Sardar Sarovar Narmada Nigam Limited (ssnl) that manages the entire canal network, on the condition of anonymity.

The topography of the area is like a saucer. The first half of the Saurashtra branch canal is sloping, while the second half is flat, where water has to be pumped to keep it flowing. "The rainfall happened in 110 sq km of the canal's tail-end area. As the water was draining towards the slope, its movement was obstructed by the pump house, which can pump water only in one direction (away from the slope), thus it was broken," said an ssnl official. According to ssnl officers, more than Rs 50 crore will be required to reconstruct the pump and repair the breaches.


Did the designers of the canal err in assessing its required holding capacity? Usually, engineers consider rainfall data of 50 years while deciding the design capacity, but a change in the rainfall pattern in the past few years has spoiled the calculations.

Saurashtra is a drought-prone area but rainfall pattern there is changing. The rainfall in 24 hours on September 19 was 1,123 mm in Lakhtar, almost double the average of total rainfall in a year there, 550 mm, according to the State Disaster Management Authority. The average is based on last 11 years' data. In 2007, Lakhtar received 836 mm of rainfall. In Limbadi, rainfall in September was 622 mm in 24 hours as against an annual average of 699 mm. "I have seen floods only four-five times. The last big flood was about 35 years ago. But this year's is the worst," said octogenarian Megabha Mohan Samatiya of Moti Katechi village in Limbadi. In 2005, Limbadi received 1,245 mm rainfall.

But in recent years people in Surendranagar have suffered small floods almost every monsoon. "The canal breaches every year during monsoon in Halwad and Dhrangadra talukas. We have reported this to the mamlatdar, a block-level officer, several times but there is no action," said Patel of Agariya Hitrakshak Manch.

Wherever the ground level is below the canal bed level, drainage siphons are created in the canal every one-and-a-half kilometers. But even siphons got submerged. They easily get clogged by silt and logs. "Drainage paths have got obstructed due to the canals which divide the topography into two. Whatever we do, we cannot fully compensate the requirements of nature. People will breach the dam when they see danger to their homes and crops," admitted the ssnl official.

A study by the Tata Institute of Social Sciences released in August this year shows that about 52 per cent of the command area of the Narmada canal faces very high probability of water-logging and salination, resulting in crop loss. This is even as the supply for irrigation and drinking water has not been fulfilled according to its potential.

Himanshu Upadhyaya of the Delhi-based ngo Environics Trust said rainfall was a "frivolous" excuse for what happened in Saurashtra. "This cannot be called flooding because none of these areas is near a river basin. The phenomenon of local flooding due to water-logging was evident in 2004. Infrastructure in Gujarat overlooks the gradient of land, be it canals or the highways," he said. The Ahmedabad-Vadodara Expressway had caused similar damage during the 2006 flood.

Farmers like Jadhav, however, continue to believe that floods are God's will, giving the government a clean chit.