Despite having a history of floods, state did not have a disaster management system in place 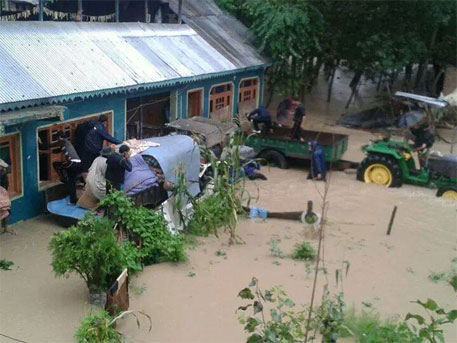 After the extreme rains that caused floods and claimed over 200 lives in the state, Jammu and Kashmir got some respite on Tuesday as floodwaters began to recede. But the Met office has now forecast more rains in the region in the next 48 hours, which may hamper ongoing rescue efforts.

Even as people fear another spell of heavy rains, questions are being raised about their not being warned sufficiently in advance about the extreme weather event last week. The India Meteorological Department (IMD) had warned the state of “very heavy rainfall” from September 2. The warning indicated that rainfall would continue for several days.

However, a senior official of National Disaster Response Force (NDRF), on condition of anonymity, said there was not a single warning issued before the floods. And since the force was caught off-guard, the rescue has been challenging.

It turns out that IMD did issue a warning through its seven day forecast much before the heavy rains started on September 2. But evacuations and rescue operations started after September 4. The question is why did the message not reach the departments concerned?

It is the role of the DEOC to disseminate the alert at the district level. This is how the warning should reach gram panchayat pradhans and patwaris who can carry out the evacuations with the help of district administration and police. These people have to evacuate residents by announcing warning over loudspeakers so that lives can be saved before disaster strikes.

Once a warning is issued, SEOC and DEOC have to operate for 24 hours so that there is not even a slightest delay in spreading information. The state disaster management authority (SDMA) has to ensure coordination between the state administration, defence forces and the NDRF. The problem is that the SEOC in J&K is non-functional unit without the infrastructure that is required to perform its function.

The work towards disaster preparedness in the state started only in February this year by the state executive committee when it approved setting up of four SEOCs—one each in Jammu, Srinagar, Leh and Kargil districts—and released Rs 18 crore for purchase of equipment required for carrying out rescue operation during natural calamities and for post disaster relief and rehabilitation.

When IMD issued the warning for heavy rainfall in first week of September, SEOC was but a small disaster management cell  functioning out of the divisional commissioner’s office.
“The people in disaster management cells hardly have the expertise needed to understand the warning. It is a new set up and not-fully functional,” said an official in the divisional commissioner’s office who did not wish to be named. He also said that the warning from the IMD also reaches various state departments but they are so “general” that it is difficult to understand how critical the situation could be.

After every disaster, IMD is blamed for issuing a general warning, which does not tell how severe the implications could be. Even after Uttarakhand floods,  IMD was blamed by the disaster management department for issuing warnings that do not look “serious enough”.

Puthumai A Nazarene, United Nations consultant on emergency and disasters, says that it is not the role of IMD to interpret data or implications. IMD’s role is to issue warnings. It is the role of the disaster management departments in every state to interpret the warning and alert various departments. For example, in hilly areas, if it rains heavy, there are possibilities of landslide and damage to roads and highways. “How can we expect IMD to say that roads are expected to be broken? It is the job of the SEOC to understand how much rainfall is heavy or very heavy rainfall and how it could affect infrastructure in the state and, accordingly, warn the departments concerned,” he says.

In 2010, the Jammu and Kashmir Flood Control Ministry had issued a warning and prepared a report that the state is likely to face a major flood catastrophe in next five years and the department is ill-equipped to save lives and property. The department expected a water discharge of around 150,000 cusecs if flood hits Srinagar city.

The flood control department has proposed a Rs 2,200-crore project to put the required infrastructure in place in anticipation of the devastating flood. The report was submitted to the Union water resources ministry, requesting Rs 500 crore immediately to have “at least basic infrastructure”. However, nothing happened after that.

But despite having been reminded of J&K’s vulnerability to disasters, there is no state disaster management plan or flood monitoring stations.