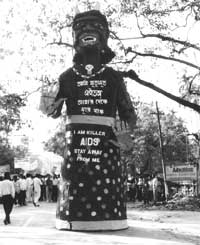 globally, there are now 40 million adults and children suffering from aids, according to a new report by the World Health Organisation (who) and the Joint United Nations Programme on hiv/aids called unaids. The epidemic shows no signs of abating -- with almost five million new cases reported worldwide in 2001.

The epicentre of the catastrophe remains sub-Saharan Africa, where the disease afflicts more than 28 million people and 2.3 million are estimated to have died there by the end of year 2001. Globally, approximately three million people are expected to die of the disease by 2001.

" aids has become the biggest threat to Africa's development," the report states. Calculations suggest that the hardest-hit African countries could lose one-fifth of their gross domestic product by 2010 as a result of the aids epidemic. The disease has also reduced the average life expectancy in four African countries -- Botswana, Malawi, Mozambique and Swaziland. It is now below 40 years -- much less compared to 'the more than 60 years expectancy' prevalent before the disease took endemic proportions.

The rates of the disease have been also spiralling in other parts of the world, such as Eastern Europe, South and South East Asia. Even in 'high-income countries' such as the us and the uk, where expensive anti-retroviral drugs are available, rates of new infections are creeping upwards. " hiv is spreading rapidly throughout the entire Eastern European region. It is unequivocally the most devastating disease we have ever faced and it will get worse before it gets better," warned Peter Piot, executive director of unaids.

A number of countries are singled out by the report as places where the virus is spreading exceptionally quickly. For example, in China, the total number of aids patients may have swelled past one million by late 2001. In the Russian Federation, intravenous drug use is the reason behind the upward trend of the disease that too in just a couple of years -- in 1996 there were just a few thousand hiv cases reported, but by end of 2001, the total is expected to be approximately 130,000.