Flowing with the Kaveri 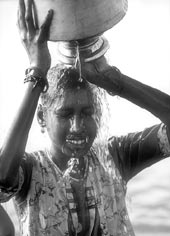 Clare Arni's exhibition, titled Kaveri: The Portrait of a River, meticulously traces the river's 1355 metre-long course, from its source in the Kodagu district of Karnataka to the Bay of Bengal at Poompuhar. 37 photographs capture the protean character of the river. Take for instance the inaugural exhibit, the river at its birthplace, Thalakaveri. The intense greenish-blue of the still waters, the sadhu in his blood-red shawl, grim and stolid, a bowl with coins at his feet, miniscule against his full figure:

Arni's lens captures the drama of birth and creation in its entirety. At Kings bathing ghat, where people perform myriad daily chores, the river is a symbol of life. But at Siringapatna, where last rites are performed, it represents the passage to the other world: the predominance of shade in the photograph aptly conveys the bleakness of death. Equally fascinating is a shot of a youth bathing a bullock, with its power-packed human form, the bold blue waters and the youth's clinging hold on the tether. The river in monsoon is splendid: white with rage, it lashes the rocks that stand in its way. The final exhibit shows a young girl bathing at Poompuhar. The girl's upturned vessel, the sparkling water drenching her ripening form hint at the benign and nurturing nature of the water. The Kaveri is Arni's protagonist and she shows how fulsomely it weaves through human lives and traditions.