While more villages in UP's Unnao district are gripped by fluorosis each year, the state's ground water board remains entangled in bureaucratic procedures. 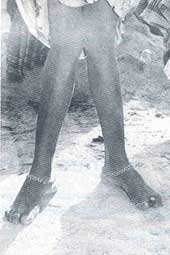 THREE years ago, the state government directed the Uttar Pradesh Ground Water Board (UPGWB) to carry out a detailed survey of the fluorosis-affected villages in Unnao district. But it has yet to release the Rs 7 lakh that such a survey would cost. Despite this, the UP government recently directed the UPGWB to conduct another survey of the fluorosis-affected villages, thereby creating a piquant situation.

UPGWB director Y K Mathur is still trying to get K R Bhati, secretary of the UP Rural Development Department, which has jurisdiction over UPGWB, to release funds for the first survey. He was unaware of the government's new directive and officials are attributing this to "a communication gap".

According to Mathur, the Central Ground Water Board (CGWB) published some technical reports in 1988 on the hydrogeology and geochemistry of Unnao district in which it stated, "Some aquifers of different depths are rich in fluoride and are causing fluorosis, but fluoride-rich aquifers have not been delineated so far by any agency."

It had become evident in the mid-1970s that the crippling disease was endemic in more than 20 villages in the district. Studies carried out by the National Technology Mission for Drinking Water in 408 Unnao villages showed the fluoride level in many instances to be 15-19 parts per million (ppm), as against the safe limit of 1.5 ppm.

But the technology mission's work was hampered because of a lack of detailed data, though the district was visited by many institutes and organisations, including UPGWB, CGWB, the Industrial Toxicology Research Centre, the Sanjay Gandhi Post-Graduate Institute of Medical Sciences and the Indian Institutes of Technology.

The villagers are now wary of survey teams and weary of being injected for blood samples and being given pills. They are resigned to the knowledge that they have no alternative but to drink fluoride-contaminated water. "All those surveys are meaningless; we have come to realise that nothing will be done," says Prithvi Pal Singh, former pradhan of Marx Nagar, six km off the Lucknow-Kanpur road. Marx Nagar is a hamlet of 30 huts with a pucca well that supplied safe drinking water till the late 1970s. Now, its water is fluoride-contaminated and has become a scourge.

Many other villages in Unnao district face a similar situation. Their drinking water is no longer safe and the depth of their ground water is low.

Ram Pyare, a primary school-teacher, is typical of the villagers who want water to be supplied by pipeline from a distant source. They argue their drinking water problem would be solved and money would not have to be "wasted" on research. What they do not know is that there are no safe ground water sources in their area.