Birds can remember. And quite well too. A new experiment sheds more light on how they do it 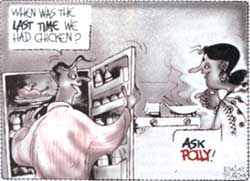 MEMORIES. Mysteries of the human mind. Though the intricacies of our mind still remain confusing to researchers, they have some idea about how we 'remember'. What and where are some of the basic parameters that help us remember incidents. Controlled experiments, coupled with the experience of pet lovers, tell us that as far as animals are concerned, they, like us, use these two parameters to remember persons, locations and events. Humans, however, have episodic memory: when recalling an event, we also remember when it occurred. But what about the animals, researchers wondered. Do they have episodic memory too? Can they, like us, recall the time of an incident?

Till now, most scientists thought that episodic memory was something exclusive to humans. A recent report, however, contradicts this long-held belief.

Contradicting all previous theories, this report says that animals have episodic memory too. Nicola Clayton and Anthony Dickinson from the University of California, USA, and the University of Cambridge, UK, say they have found evidence proving that birds also possess episodic memory. Their report was published recently in Nature (Vol 395, No 1543). It shows that birds which store food for later consumption seem to recall when they stored a particular food item. They can decide if it is still edible or not.

Clayton and Dickinson experimented with scrub jay birds. These birds are into hoarding: collecting food and storing it in different locations for use in winters when foraging becomes difficult. Fortunately for the researchers, the strange environment of the laboratory did not scare these birds, and they went about their business, collecting and storing food. This enabled the Clayton and Dickinson to study the birds' method of retrieving food they had stored earlier.

The duo got the birds to collect and store peanuts, which have a long 'storage life' and thus remain edible for a long time, fresh worms stored for four hours - still edible - and decayed, inedible worms. Given a choice, the birds prefer worms to peanuts. This should be kept in mind when examining the report's conclusions.

The birds were then divided into three groups. The first group, called the "degrade" group, learnt that after five days, worms were no longer palatable. These birds were also taught to store the peanuts and the worms separately. During the experiment, the birds were given one of these food items to store. Then, 120 hours later, they were given the other food item. After a further four hours, they were allowed to retrieve the food items. Birds that had stored worms most recently went back to these, and those that had stored peanuts 124 hours earlier, went back to peanuts.

The researchers also discovered that when devoid of their ability to see the food, the birds still chose the food that was edible.

Could it be that the birds forgot the worms and could remember only the peanuts, the researchers wondered. They took the second of the three groups, called the "replenish" group.These, unlike the birds from the first group, did not know that worms decayed and were unfit for consumption after five days.

In the experiment with this group, the researchers removed the worms the birds had stored and replaced them with fresh ones. But this, they found out made no difference: the birds still tried to retrieve the worms. So they were not forgetting the worms as Clayton and Dickinson had wondered.

Lastly, in the experiment with the third group, the "pilfer" group, the researchers removed the worms that the birds had stored. They were attempting to imitate nature, where it is highly possible that food stored over a long period is eaten by someone else.

This shift in the preference - from worms to peanuts - of the "degrade" and "pilfer" groups showed that the birds could clearly remember what had been stored, where it was located and most importantly, when was it stored: four or 124 hours ago. These birds can display a complex mental phenomenon so far associated exclusively with humans, the researchers concluded. What could be the implications of this finding?