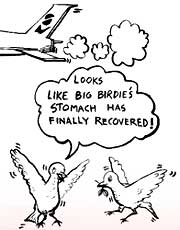 a new generation of passenger jets, which will mainly use hydrogen as fuel, are in the offing. The aircraft will be cheaper to run and cleaner, leaving little more than a trail of water vapour across the sky ( Flight International , Vol 151, No 4565).

The new aircraft, called cry oplanes, will have bulbous cabins and stubby wings and carry frozen hydrogen in large refrigerated tanks above their fuselages, making them among the oddest looking crafts to fly, according to spokespersons at Daimler-Benz, Germany, which is manufacturing the planes. Its range is expected to be more than 6,000 km per flight as hydrogen provides three times more energy than a similar amount of kerosene. A small executive jet cryoplane will be in service by ad 2005.

The project has been kept a secret until now because engineers feared they would not overcome the enormous engineering problems. Hydrogen is so light that it boils at -253 c , and thus must be kept in pressurised tanks inside a vacuum compartment. The breakthrough made by the researchers was in finding a way to redesign the fuselage to make it large enough to take both passengers and fuel and retain its aerodynamic properties.

Cryoplanes will offer many advantages over aircraft using conventional fuels, including a pollution-free flight. When hydrogen burns, it combines with oxygen to produce water. By contrast, kerosene generates hundreds of breakdown products, whose release in the upper atmosphere contributes to the greenhouse effect.

Hydrogen has had a checkered history in powered flight. It was first used in airships, lifting them off the ground while separate engines, powered by petrol, kept them moving in the right direction. It was discarded for air travel after the Hindenburg airship disaster some 60 years ago. The recent renewal of interest in hydrogen is driven mainly by predictions of steep increases in the price of kerosene. Hydrogen, by contrast, can be made cheaply and easily, by passing an electric current through water.