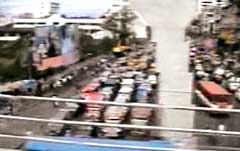 Clogged streets, heavy vehicular pollution and inordinate delays in getting to destinations: most of us fret over the state of urban transport. But only a few seem to realise that transportation issues are intrinsically linked to questions of equity. The documentary under review is one of them.

With footage from Burma, Malaysia, the Phillipines, Thailand and Singapore, Moving forward, towards better urban transport delineates some of the major problems associated with transport in cities. And in the process, this 20 minute documentary asks some searching questions: do low-income earners have the same transport options as those with higher incomes? Do women have the same transportation needs as men? What transport problems do children face? Can people with disabilities move about in cities? Directors Zaitun M Kasim and A Rahman Paul Barter use quite a simple technique. A background commentary accompanies shots of chaos that bedevils urban life: traffic jams galore, pedestrians and bicyclists scurrying away to make way for cars and heavy transport, the disabled grimacing their way to work. But this simple technique is quite apt to effectively critique fashionable solutions to transport problems: flyovers, roads and more such amenities.

The film also demystifies the notion that urban transport is a middle class problem: it shows that the poor, the disabled, women, people with insecure housing rights or those who live in inaccessible areas bear the brunt of transport problems. "People who are economically, physically and socially disadvantaged are harmed by transport policies that focus solely on economic efficiency," argue the directors.

The film then moves on to solutions. Traditional approaches to transport planning usually distrust community involvement and insist that transport is a purely technical matter best left to the experts. But communities, organisations and individuals can take action on the issue, argue the directors. "Unless there is an effort to involve poor communities, pedestrians, bus riders and non-motorised vehicle users in transport planning, only interests of motorists and big business will be served," contend the directors.

The film's cinematic quality falls here and the commentary takes over. But the documentary does not sag under the weight of polemics. It, in fact, offers quite a persuasive argument for making equity centre-stage in transport policies.