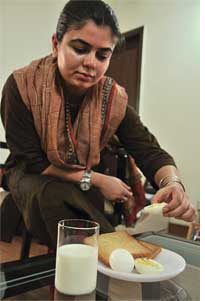 unbalanced diet during pregnancy affects the health of the developing foetus. But it can be more serious. A recent research suggests low protein intake by a pregnant woman can damage foetal cells. So much so that it can lead to diseases like diabetes later.

Lead researcher Nicholas Theys and his team studied the effect on low-protein diet on pregnant rats. They fed a diet with 20 per cent protein to one group and a diet with 8 per cent protein to the other. They studied pancreatic and liver cells of the rats at different phases--from gestation till they were three months old. When compared, gpx level remained consistently low in low protein-fed rats; the size of their pancreas had reduced and insulin levels were lower, the scientists said in the July issue of PloS One.

They also observed the rats had poor defence mechanism even after they grew up. The researchers attribute this to the damage to mitochondria, which provides energy to the cell. They plan to study the role of malnutrition on the function of mitochondria.