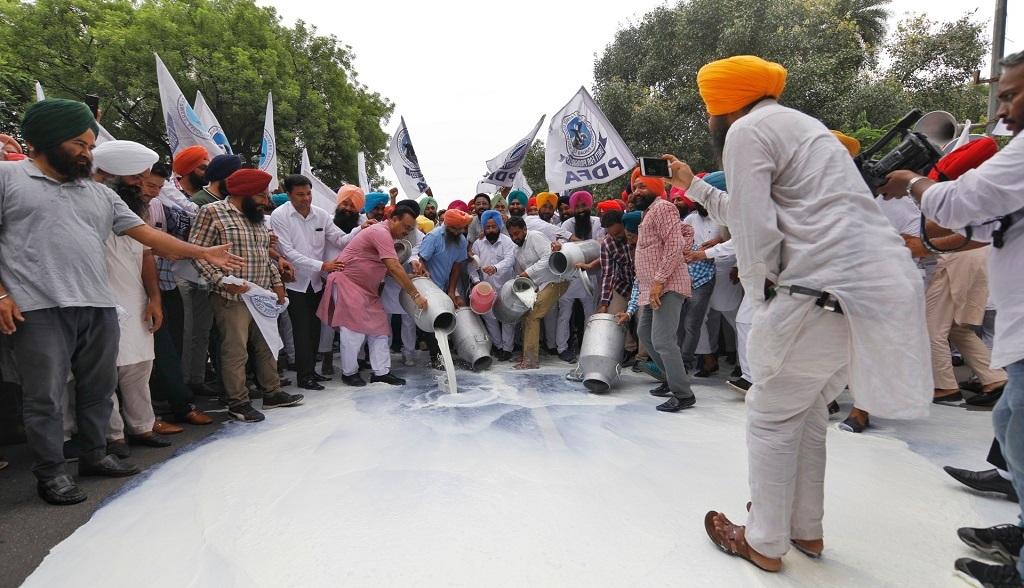 India is the largest producer of milk, but that’s not working in its favour since the country is facing a market glut. Around 3 lakh metric tonnes of skimmed milk powder (SMP) is stacked unused in various warehouses throughout India, says S Daljit Singh Sadarpur, president, All India Progressive Dairy Farmers Association (AIPDFA).

The AIPDFA held a protest against this scenario at Jantar Mantar on Tuesday (July 31) and demanded that dairy farmers be given a minimum purchase price of Rs 30 per litre for cow milk and Rs 50 for buffalo milk. They also signed a memorandum of demands and suggestions for the government to pull them out of this crisis that has been going on since last year.

The main reason behind this surplus milk stock is reduced demand of SMP in the international market and a subsequent drop in prices to Rs 120 per kg when the cost of production itself is Rs 200. “The government has sanctioned a subsidy of 10 per cent, but it is not enough since we need 50 per cent to move the stock to the international markets,” adds Sadarpur.

The dairy farmers say they are being paid less since the demand declined. Ranjit Singh, a dairy farmer and the secretary of AIPDFA in Punjab, says, “Last year the rate of milk was between Rs 30 and Rs 32, and now it has come down to Rs 20-22. The farmer is bearing a loss of Rs 10 in every litre of milk he is selling. The processors are also procuring less as they already have a lot of SMP stock just lying with them.”

When Gujarat can gives Rs 3 crore subsidy to Amul, why can’t all state governments or the Centre give more export subsidy, asks Singh.

The farmers also demand that GST per cent on dairy farm equipments, like milking machine and milk quality testing machine, be reduced. “In another three months, the peak season will start. If the surplus SMP is not exported till then, it will again ensure that the prices fall and the farmers will again be on the receiving end,” says Sadarpur.

He adds that this protest is just a beginning because they have decided that if their demands aren’t met soon, the AIPDFA will launch a nationwide protest from Delhi.