Nobel Laureates pitch in for a hunger-and-violence-free world 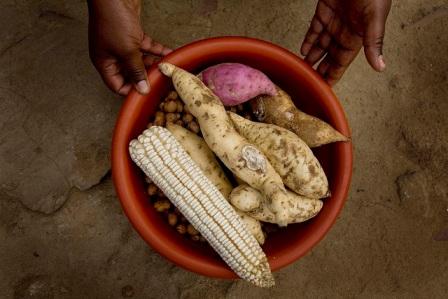 Emphasising that achieving a peaceful world is impossible without ensuring food security, four Nobel Laureates joined forces with the Food and Agriculture Organization (FAO) to tackle hunger and violence in Rome recently.

Oscar Arias Sánchez, Tawakkol Karman, Betty Williams and Muhammad Yunus will advise the FAO on ways to strengthen the crucial link between peace and food security to promote sustainable development across the world.

“Freeing the world from hunger and want is a fundamental contribution to lasting peace,” FAO Director General José Graziano da Silva said during the launch of the FAO-Nobel Peace Laureates Alliance. “Agriculture and food security give new life to affected homes and communities—they bring people together and drive recovery.”

In the midst of the global talks in Paris about drafting an ambitious and strong climate deal, the FAO DG had appealed for a safer, fairer and more inclusive world.

People living in rural regions continue to be the most affected as a result of conflicts, as attacks on farming communities undermine rural livelihood and give rise to large-scale displacement.

Founder of the Grameen Bank Yunus placed support for rural entrepreneurship at the heart of the solution to end hunger and instability.

“We know business as a way to make money. But there can be another kind of business—a business to solve problems,” he said.

“Rural people can be as good an entrepreneur as anybody else—we need financial institutions to support them,” he added, so that youth see a future in rural areas and become drivers for employment and economic development rather than migrating to cities as job seekers.

“Poverty and fear do not require a passport to travel,” Sánchez, the former president of Costa Rica, said, drawing attention to how hunger and want of opportunity have caused the largest migration crisis the world has seen in decades.

“There is the violence that strikes with weapon and that which slowly creeps up,” he added, as he outlined the many ways war affects farming communities and the environment.

She noted that while the process of globalisation currently transforming the planet has allowed some individuals and corporations to amass vast fortunes, millions of people go hungry each day. “This equation needs to change, she said.

“When you see a problem like hunger, there is no point in crying about it—the question is, what are you going to do about it,” said Irish peace activist Williams.

Former UN Secretary General and Nobel Laureate Kofi Annan underlined the ways that hunger and competition for agricultural resources can exacerbate social tension and called for a more holistic way of thinking about food security and peace.