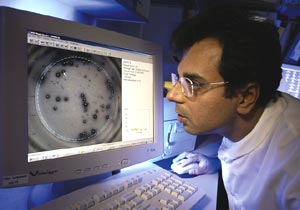 the diagnosis of tuberculosis is likely to be faster and more reliable in the future with researchers from the uk-based University of Oxford developing a new diagnostic kit called elispot. A study carried out to compare the results of elispot with that of the conventional skin-prick test shows that the new kit can even identify dormant cases (people who carry the disease-causing bacterium Mycobacterium tuberculosis, but do not show the symptoms of the disease). The study was carried out on 535 students of a school in Leicestershire, in the uk, where an outbreak of the disease had occurred in 2001. The conventional kit showed 121 students to be suffering from tuberculosis, whereas elispot identified 147 cases.

To detect M tuberculosis, elispot uses a chemical, interferon-gamma ray that is released by the antibodies present in the blood when they encounter proteins of the bacterium. Compared to this, the conventional skin test is quite rudimentary. It involves injecting a mixture of 200 proteins of the tuberculosis bacterium under the skin. The skin swells up if the person is infected. But a similar swelling can also take place if the person has been vaccinated earlier against the disease or has been infected by a bacterium related to M tuberculosis.

According to Ajit Lalvani, the lead researcher, elispot can yield results in a day as compared to a week taken by the conventional test. The kit is going to be marketed by Oxford Immunotec -- an in-house company of the University of Oxford.