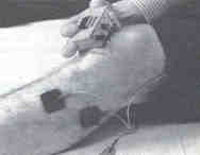 A NERVOUS stroke results in the patient losing his ability to lift his foot up; he has to drag his foot along the ground for walking. Such neurological disabilities call for re-educating and exercising the impaired muscles.

Keeping this in view, a research team headed by Ian Swain at the Salisbury Hospital in the UK, devel-ped the odstock iropped Stimulator (ODFS)Foot to treat multiple sclerosis suf-erers and stroke victims. It is reported that patients undergoing hysiotherapy in this hospital using the new device have benefited greatly, (Spectrurn, No 247, July-August, 1995).

The ows is a neuro-muscular device powered by a 9-volt battery - not bigger than a TV remote control. The device has 2 components - a triggering switch and some electrodes. The former can be either a force-sensitive foot switch placed under the heel in a patient's shoes, or a hand switch controlled by a patient or the therapist. The electrodes are fixed on the skin which send electrical pulses through them. When the patient lifts one heel off the ground, the switch is activated. As a result, electrical impulses are sent through the electrodes placed on the skin that in turn stimulate the nerves. This causes the appropriate muscles to contract, and as a result, the foot automatically lifts off the ground. The usage of the ODFS, which is called the Functional Electrical Stimulation (FFs), has become an integral part of the rehabilitation and physiotherapy progranune in this clinic. fan Swain now aims at making a wheelchair-bound patient stand up right at the click of a switch. That involves developing FES for application to spinal injury.ln this system electrodes would be connected to the nerves which attach themselves to the spinal cord. An electronic stimulator would be implanted in the spinal cord in the similar way a pacemaker is implanted in the heart of a patient suffering from coronary disorders.