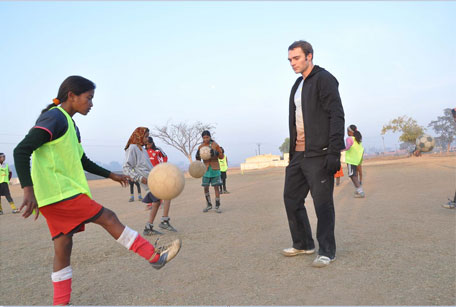 In this season of football, an all girls football team comprising 18 girls from poor tribal families is in the US to participate in the USA Cup tournament beginning today in Minnesota. The team made its mark in Spain’s Gasteiz Cup tournament last year by coming third in the under-14 group.

The tribal girls are from different villages from the outskirts of Ranchi in Jharkhand. Most of them belong to extremely poor families and had to struggle against government apathy and abuse on their way to stardom.

These girls practice on an uneven football ground which has goal posts made of bamboo sticks; there are no nets. They have limited sports gear but they practice with enthusiasm.

The turnaround for about 150 tribal girls in the age group of 12 to 16 years came after a modest initiative started by Minnesota-born development professional, Franz Gestler, who worked in New Delhi as a corporate social responsibility (CSR) consultant. As a part of his work he visited Jharkhand, and subsequently decided to stay on; he was hosted by a tribal person and lived in a house built of mud.

“I used to play football with village youths. Girls used to watch us curiously, and then one day, we invited them to play with us. It was then the idea struck me to train these girls for empowerment,” he says.

After three years of hard work, Gestler started getting support from many quarters. An organisation by the name of Yuwa supported the initiative and gave proper shape to the programme. The entire initiative aims at ending human trafficking and to eradicate child marriage of tribal girls.

“The motive is to give a respectful future to these girls who are trafficked in large numbers to other states. They are exploited and abused,” Gestler says.

45,000 girls trafficked from Jharkhand
According to 2005 study conducted by state government in coordination with Crime Investigation Department (CID), around 45,000 tribal girls are trafficked to metro cities every year. “These girls work under deplorable condition are exploited and abused by employers. Unfortunately, after 2005 no fresh survey was conducted,” says Sanjay Mishra, member of State Commission for Protection of Child Rights.

The team of Yuwa and its volunteers built up the football skills of the girls, but kept struggling for years to gain respect and support. Their first breakthrough came when they won bronze at the Gasteiz Cup tournament in Spain in July last year.

Government hurdles
But participation in the international tournament was not easy. The girls and Yuwa volunteers made innumerable trips to the local passport office to obtain passports and visas for the 18 participants.

Some of the girls did not have valid birth certificates, address proof and other documents required for passport. “A couple of girls who went to the local panchayat to get their birth certificates were slapped after they refused to pay bribe,” Gestler recalls.

“It’s not about the bribe but we took that slap for the dignity,” Sushma Kumari, a leading member of the football team, said before leaving for the tournament in the US. Some of the girls were also forced to sweep the floor of the panchayat office.

Sushma’s mother works as a maid in local household. There is no television or refrigerator in her home. “At times I have to accompany my mother to assist her in cleaning homes,” she said.

Another player, Sharada Kumari, is the daughter of a daily wage labourer who recently lost his job. “It’s difficult to run the household. Football is our only hope for a better life,” she said.

The state government finally recognized their sporting skills after the tournament in Spain and gave an amount of Rs 27,000 as award money to each member of the football team. “I have deposited this money in bank account. This money is for my higher education,” Sharada said, adding that she will not work as a maid like her mother.

The girls’ struggles are still not over. Yuwa team has been pleading with the state government for the last three years to provide a football ground for training the girls. Former Union minister, Jairam Ramesh, who met the tribal girl football team assured of providing a football ground but there is no progress.

English lessons
There is another team of Yuwa that tirelessly works to impart education to tribal girl footballers. They provide books, teach and help girls in developing English language skills.

One of the volunteer teachers, Sarah Van Vooren, left recently after teaching the girls for over six months. Her last plea to girls before leaving was: “Don’t stop speaking English”.

The Yuwa team has now managed to rope in global companies to support the girls. They include Viber, Lenovo, Tata Sky and Star Sports.

Not many parents would be able to watch their daughters display their sporting skills in the US as they do not have television sets. But the girls would be trying hard to score the final goal to secure their future.