Unlike the first United Nations conference on climate change, the recently concluded second meet was marked by a desire to give the planet a second chance 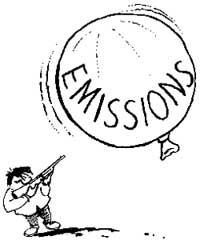 it was Geneva's turn this time to play host to another meeting of the Intergovernmental Panel on Climate Change (ipcc), the second Conference of Parties (cop-2), between July 8-19, 1996. The agenda of the meet, attended by 150 countries, was straightforward: to evaluate the progress made since cop-1, which was held in Berlin, Germany, in 1995, where the Berlin Mandate was drawn up ( Down To Earth , Vol 5, No 4), and to achieve an overall consensus on specific emission reductions of all greenhouse gases (ghg).

At the outset, these seemed rather simple targets.But, as the days wore on, it became amply clear that the developed countries had failed to stick to their side of the bargain; only Germany and uk, among the developed nations, had honoured the commitments to reduce emissions to the 1990 levels, made at the Rio Earth Summit in 1992. cop-2 was a prelude to the 1997 conference in Tokyo, Japan, where the 150 signatories to the United Nations Framework Convention on Climate Change (fccc) will discuss measures, if any, to take after ad 2000.

The root cause of global warming has been pointed out to be "humankind's discernible influence", in various ipcc reports. Considering the paucity of knowledge on the actual impacts of global warming, ipcc has suggested that the world should adopt the path of least resistance - an adoption of a "no regrets policy" that can only have positive side-effects.

As expected, the oil-producing countries and various industrial groups were opposed throughout the meet, to any form of cuts on carbon dioxide (co2) emissions, considered to be the main culprit behind global warming. Their mandate was that cuts in emissions would disrupt the economy of both industrialised and developing nations.

The us, however, after an initial ambivalence, was all for a categorical text that would bind all nations towards reducing emissions of ghg. Timothy Wirth, under-secretary for global affairs at the us state department, said that his country wanted a "realistic, verifiable and binding medium-term emissions target". Without setting specific targets, he added that countries should decide for themselves how best to achieve emission cuts. An ambitious goal, set during the talks for a 20 per cent cut in ghg emissions from the 1990 levels by ad 2005, was rejected by him as being "neither realistic nor achievable". Wirth also emphasised on "quick action, not decades of delay and for concrete measures, not vague promises".

The us approach was hailed by environmentalists as a positive action. Observed Michael Oppenheimer of the Environmental Defense Fund, "It shows that they have accepted the judgement of the scientific community that climate change is happening and that something has to be done about it." For the first time, the us also emphasised the need for a joint implementation strategy instead of voluntary measures, as in the past.

The sudden shift in the us policy took the energy lobby unawares. John Shales, executive director of the us-based Global Climate Coalition, said that the new plan "could eliminate millions of American jobs and reduce the nation's ability to compete globally". Even ngo representatives from the South have failed to understand this surprising volte face by the us.

Equally strangely, the developing nations, especially India, which had played a proactive role during cop-1, did a catch-me-if-you-can in Geneva. For all practical purposes these countries shied away from pushing the agenda. India did not even send her environment minister to the conference, which left many nonplussed and some angry.

Meanwhile, even as the meet was on, the World Health Organization (who) released a report in Geneva, titled Climate Change and Human Health, which emphasised the strong relationship between human health and global climate change. The report, which has been received positively by the medical and environmental lobbies, says that higher temperatures will prove detrimental to human health. A joint effort of the who, United Nations Environment Programme, A J McMichael of the London School of Tropical Medicine and A Haines of the University of London's Medical School, the report only brings to the fore the fact that diseases will continue to emerge long after they are thought dead.

Thirty new infectious diseases have reportedly emerged in the past 20 years. Diseases like malaria, dengue fever, yellow fever, river blindness and kala azar will become more common. So will diarrhoea and cholera outbreaks. The report makes a plea for reducing consumption by shifting to alternative sources of energy and calls for emissions control, conservation measures, land-use policies which will maximise co2 sinks and family planning to control the burgeoning world population. While the direct health effects of global warming will be caused by heat waves, storms and floods and socio-economic disruption caused by environmental deterioration would be an indirect impact.