For a ringside view of cells

How a technique developed by physicists can help biologists 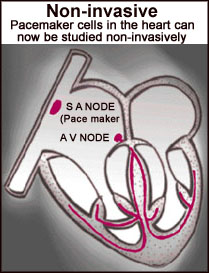 biological systems are typically very hard to simulate with some degree of accuracy. This is because the systems are extremely complex and interconnected. For instance, cells called pacemakers are found in the heart and are capable of generating and regulating heartbeat. How exactly this happens and what are the factors affecting this activity is not known very clearly. Y Soen and his colleagues at the Technion-Israel Institute of Technology have developed a non-invasive technique of studying the contractions of a self-assembled network of such cells.

In human beings, there are roughly 5,000 cells in the sinoartial node in the right upper corner of the atrium in the heart. These cells generate the signals that keep the heart beating regularly. Soen and his colleagues used muscle cells and connective tissue from the ventricles of rats' hearts. The cells were then spread out on a petri dish and incubated. The cells proliferated, and after some movement, in about three weeks, formed a network of fibres.

This fibrous network was studied using a special camera called a charge coupled device ( ccd ), and the information was processed in computers. A ccd camera counts the number of photons or particles of light entering it by using a photosensitive microchip. This information is then processed using a computer to generate an accurate image. The researchers detected rhythmic contractions in the cells of the network. Continuous monitoring of the network revealed the spontaneous appearance of various rhythmic disorders. Further observations suggested the emergence of intrinsic pacemakers in the network ( Physical Review Letters , Vol 82, p3556).

While pacemaker activity has been observed in cells earlier, this is the first non-invasive monitoring of cell activity. Though this network of cells is quite different from a biological heart, the researchers hope that the technique will allow them to study what factors are responsible for the development of these biological pacemakers.