For a smooth flow 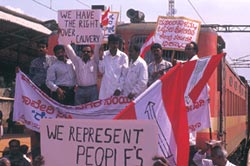 At a time when the Cauvery river dispute rages on, the Supreme Court (SC) has directed the Union government and all the states to respond on the crucial issue of networking of inter-state rivers. Such an arrangement, the apex court observed, would help tide over the cyclical flood and drought phenomenon in several parts of India. It would facilitate the settlement of river water-sharing disputes.

Attorney general Soli Sorabjee informed the court that the Union government had already identified 30 such networking links. However, he added that it could not bear the total cost of implementing the scheme -- a whopping Rs 7,000 crore. The three-judge bench disagreed with Sorabjee. It held that the financial burden could not be viewed as an impediment as state governments had been writing off crores of rupees of loans as non-performing assets. Earlier, an application suggesting networking of rivers was treated as a public interest litigation petition by the court.