Vikrams are out, electric vehicles are in. Still, the Nepal government's decision to import minibuses could put their clean air campaign back to square one 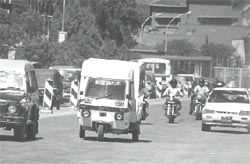 " before 1996, European tourists would often complain about the poor visibility of the snow-capped mountains from Kathmandu," says Ishwar Chettri, who runs a travel agency in the Nepalese capital. But the ban on the sale of new diesel vehicles in 1996 and the subsequent blanket ban on diesel-run three-wheelers called Vikrams in 1999 have brought about a noticeable change in air quality. "Now one can walk around the city without getting any eye problems," says Chettri.

Phasing out polluting vehicles has led to the world's largest fleet of electric public transport vehicles. With around 600 battery-driven three-wheelers, interestingly named Safa Tempos (clean three-wheelers), Kathmandu is regarded as a model of an alternative, pollution-free public transport system. "But as the government shows an indifferent attitude towards the electric vehicles, Kathmandu's air quality may worsen once again," warns Bikash Pandey, director of Winrock International, a non-governmental organisation based in Kathmandu.

The Nepalese government recently sanctioned the import of 300 minibuses without specifying whether they would be run on liquefied petroleum gas ( lpg ) or diesel, even though there was a strong public protest against such a move. Even the environment minister, Shiv Raj Joshi, opposed the move. "I am very much in favour of the electric vehicles. The decision to import vans was not mine," he was reported to have said.

The fallout of this ill-timed move is already being felt among the manufacturers of electric vehicles. Nepal's largest manufacturer of electric vehicles, the Nepal Electric Vehicle Industries Ltd ( nevi ), has already reported a slump in sales and expects losses this year. It made a profit for the first time last year. "If the import of these small buses would get the same preferential custom rebate as those of the Safa Tempos, the incentive to make cleaner vehicles might get affected," says Pandey.

Meanwhile, the manufacturers of Safa Tempos are accusing the politicians and police officials -- who reportedly have business interests in the new fleet of imported lpg or diesel minibuses -- of lobbying for the import decision. The government's stubbornness on the import sector can be gauged from the fact that recently it denied permission to a few electric vehicle manufacturers, asking for field tests for their new cargo version of the Safa Tempos. This decision was taken as the government had already decided to import such vehicles from the uk .

It was during the Indian government's economic blockade in 1989 that the idea of electric vehicles came into existence in Nepal, which is totally dependant on India for fuel as well as the price of diesel and petrol.