For conservationists of all hues 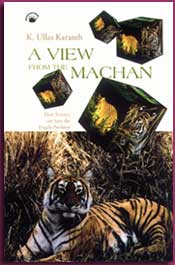 A View from the Machan: How Science can Save the Fragile Predator By Ullas Karanth New Delhi Permanent Black

The 1980s and 1990s saw a profusion of natural history writing by eminent Indian naturalists such as M Krishnan, E R C Davidar and Valmik Thapar. But scientists such as E O Wilson or John Terborgh, who could effectively communicate the scientific understanding of the workings of nature to the layperson, are still few in India. Popular writing by biologists remained a neglected area in India for a long time. However, a recent trend in biology writing, pioneered by the Indian publishing house Permanent Black through its Ecology series, seems to be picking up steam. An example of such writing were seen in the 2003 book Battles Over Nature that brought together social scientists and biologists on controversial politics and science of conservation. A View from the Machan by the well-known biologist Ullas Karanth is another welcome addition to this genre. What scientists can bring to such writing is the scientific understanding of eological structure and function -- in the light of which future changes in ecosystems can be understood.

The primary purpose of this book under review is introducing the layperson to the importance of science in nature conservation. The author has anchored this idea on the historical role of the Royal Bengal Tiger --this has inspired conservation action in India since the wildlife crisis of the late 1960s. Karanth dwells primarily on the theory and practice of the conservation of tigers and other predators; this is understandable since he has worked on these issues for over two-and-a-half decades. Karanth dwells on these issues in simple terms. Using examples from his research, he explains how and why mammalian predators function as they do in different ecosystems, what controls their numbers and how predator-prey relationships can be quantitatively monitored. This information is used to make a case for choosing the tiger as the flagship species for conservation in India.

The nitty-gritty of wildlife biology that goes into ecosystem monitoring is explained in a language accessible to the lay reader. How does a biologist transcribe questions into observational field studies? Why is 'sampling' preferred to 'counting' in wildlife science? What are the different levels of understanding of population ecology that are essential for long-term management of habitats? These questions raised by Karanth are critical to understanding current controversies in tiger conservation, fuelled by the latest extinction crisis in India.

Based on his long field experience Karanth also dwells at length on the relative merits of various conservation strategies in India.Using examples from mammalian ecology, he makes a strong case for retaining strictly protected areas alongside mutiple-use forests and industrial landscapes. This is necessary to minimise human conflict with large mammals such as elephants and tigers, for preservation of specialised and habitat-restricted species and for the defragmentation of habitats to increase long-term viability of animal populations.

To support his argument, Karanth cites the lack of evidence on the compatibility of consumptive uses of forest habitat with the task of preserving its entire array of biodiversity. Here, one wishes Karanth had dwelt more on the strategies by which local residents can be better accommodated in protected areas in their neighbourhood -- making them partners in conservation can be one such method. Historical injustices and social inequities in the exclusionary conservation game are, at least, as important to address as the more immediate scientific and management issues.

That apart, this volume is valuable because we get to know what drives a wildlife biologist in India despite enormous challenges -- such as the unresponsive, and sometimes antagonistic, bureaucracy and lack of institutional support for ecological sciences. What comes across clearly is the critical importance of supporting scientific research in our conservation areas, which would need changes in our forest bureaucracy and scientific institutions. The argument gets strength since it's advanced by a biologist who has spent three decades in forests studying endangered species. This lucidly written book is recommended for conservationists of all hues.

Ghazala Shahabuddin is an ecologist with the Council for Social Development, New Delhi