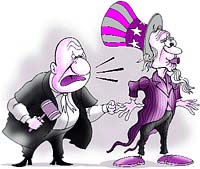 The us Environmental Protection Agency (epa) suffered a double whammy on September 15, when two separate lawsuits raising the same issue were filed against it in the federal district court for the Southern District of New York. The contention in both cases: epa 's inability to implement stipulated children-specific standards for pesticide content in food. These norms prescribe an additional tenfold margin of safety.

The plaintiffs in one of the cases are the attorneys general of New York, Connecticut, Massachusetts and New Jersey. Litigation in the other has been initiated by an 11-member informal group comprising the Natural Resources Defense Council (nrdc), Pesticide Action Network North America, Breast Cancer Fund and Physicians for Social Responsibility.

nrdc staff attorney Aaron Colangelo explains why the recourse was taken: "We petitioned epa repeatedly in 1998 to protect infants and children, but it didn't respond. The issue was also raised in several comments to the agency on individual pesticides. This, too, didn't bear fruit. We've had to sue epa because not only has it failed to shield kids from pesticides, it is actually re-approving many such toxic chemicals."

Marc Violette of the New York attorney general's office, too, cites similar reasons: "Two years of meetings, conference calls and document-swapping with the agency did not yield anything. In our view, further interface of this nature was not going to sway epa to do its job." But the watchdog body claims that the recommended standards are already being met and no supplementary measures are required. epa spokesperson Nina Habib Spencer asserts: "Let there be no mistake. The agency is extremely concerned about the safety of the nation's children."

Way back in 1996, the us congress passed the Food Quality Protection Act which mandated a safety factor for children that was 10 times higher than the prevalent standards. This, the legislation noted, was meant to "ensure that there is reasonable certainty that no harm will result to infants and children from aggregate exposure to the pesticide chemical residue".

The act clearly spelt out that "the Administrator may use a different margin of safety for the pesticide chemical residue only if, on the basis of reliable data, (it) will be safe for...children".

epa , however, puts its own interpretation on the regulation. "Ten is not a magic number. We have, at times, used an even higher standard for assessing pesticide toxicity to children," Spencer tells Down To Earth and adds: "Given the variety of these chemicals in the market, congress let epa scientists assess each product differently with up to a tenfold added safety factor for children."

The 1996 law was based on the findings of a National Academy of Sciences (nas) report, brought out in 1993 and entitled 'Pesticides in the Diets of Infants and Children'. According to the document, epa 's approach to regulating pesticides failed to address the unique vulnerabilities of infants and children to the adverse effects of the chemicals. It stated that the risk pertained to both greater susceptibility and higher exposure.

The report's single most important conclusion was that "because of the specific periods of vulnerability that exist during (a child's) development...the tenfold uncertainty factor traditionally used for foetal developmental toxicity should also be considered for (the) post-natal (period)". It considered the development of children from the beginning of the last trimester of pregnancy (26 weeks) through 18 years of age, and deduced that the target group could not be construed to be "little adults".

This meant that their sensitivity to chemical compounds could not be predicted on the basis of tests conducted on adult humans or even adult and adolescent animals. The document, in effect, questioned the efficacy of epa's acceptable daily intake (adi ) as a shield for infants and children. adi is the amount of chemical that can be safely ingested daily over a lifetime. The report highlighted the fact that while the safety margin of 100 -- between rat studies and humans -- includes a factor of 10 for inter-individual differences, it does not take into account "potential pre and post-natal toxicity".

It observed that infants and children differ from adults not only in size, but also in many other aspects. These include biochemical and physiological functions in major body systems; body compositions in terms of proportion of water, fat, protein and mineral mass as well as chemical constituents of these components; organ structure; and relative proportions of muscle, bone, solid organs and brain. It was inferred that such structural and functional differences between neonates and adults could influence the toxicity of pesticides. Hence the need for the more stringent standards.

The report determined pesticide tolerances to protect infants and children. These are maximum permissible limits of pesticide residues that can be allowed on raw or processed foods. The executive summary of the document emphasised that " epa modify its decision-making process for setting tolerances, so that it is based more on health considerations than on agricultural practices".

The report explicitly stated the health risks posed by diazinon, disulfoton and oxydemeton methyl, which are neurotoxins. Exposure to these pesticides can cause headaches, nausea, dizziness, sweating, diarrhoea, breathing disorders, blurred vision and memory loss. It also mentioned that alachlor and captan increase the risk of cancer.


Both the suits are, by and large, similar in content. However, barring alachlor, they target different insecticides. The attorneys general have included chlorothalonil, methomyl, metribuzin and thiodicarb (see table: Infamous five). The 11-member group is gunning for captan, diazinon, disulfoton and oxydemeton methyl. Experts believe that most of these pesticides are used on fruits and vegetables eaten by children and if epa were to use the tenfold factor, they would be considered unsafe.

The lawsuit filed by the attorneys general points out: "More than 724 million pounds of pesticides are used by farmers in the us to kill weeds and insects. epa approves these through a registration process which, since 1996, must consider the unique health risks pesticides pose to children, particularly (through their) diets. (The potential) health problems (include) damage to the nervous system, cancer, reproductive dysfunction (as well as) damage to the immune and endocrine systems. (A few) of these problems occur at lower doses in children than in adults." The other legal document states: "Some pesticides are so toxic that a teaspoonful can result in seizures and coma.

One is so potent that epa says a toddler should not be exposed to an amount weighing less than a grain of salt per day. Lower doses over time may cause neurological damage, learning disabilities, behavioural problems and cancer."

Although the epa spokesperson refuses to comment on the case on the pretext that it is under review, the agency continues to give instances of how it has tried to lower levels of pesticides in food products. In August 1999, the tolerance for azinphos-methyl on apples and pears, fruits that are eaten in large quantities by children, was reduced from 2 parts per million to 1 part per million. This became necessary in the wake of new analyses about the pesticide's side-effects on children in the age-group of 1 to 6 years.


Not surprisingly, pesticide trade association Crop Life America maintains that nothing new needs to be done. It believes that the testing required for pesticide products and the risk assessments conducted by epa are adequate to provide protection.

Pat Getter, vice-president, communications, Crop Life America, says, "The lawsuits are factually deficient. Legislative history indicates that epa was given the broad discretion to determine what extra safety factor to apply for children -- from zero to 10. So long as the agency's judgement regarding a lower safety factor and the reliability of the data on which it is based is not arbitrary or capricious, it must be upheld."

The industry has not divulged details about the financial implications of the move. But it has issued a warning that overly conservative application of safety factors in pesticide risk assessments could result in loss of availability of essential crop protection products. This represents a major economic burden for farmers and consumers.