With the help of highly reactive oxidative substances, plants manage to keep pathogens at bay 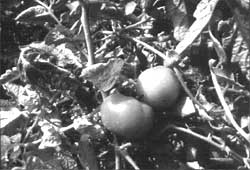 behind their facade of apparent passivity, plants possess a sophisticated behavioural repertoire. In particular, they respond to pathogens by mounting a variety of self-protection measures. Recent work by Sreeganga Chandra and colleagues at Purdue University, us, provides an insight into the method by which plants resist microbial infection (Proceedings of the us National Academy of Sciences, Vol 93, 1996).

They have shown that delayed production of highly reactive oxidative substances, such as peroxides -- called an 'oxidative burst' -- is an important component of the plant's defence. It has emerged that in many cases plants exhibit very specific responses to pathogens in the genetic sense. This means that if a specific gene in the pathogen is responsible for virulence, an equally specific gene in the plant is responsible for countering the pathogen's attack. The terminology used to describe the phenomenon is slightly confusing: the combination of a particular state of a resistance gene (r) in the plant and a particular state of an avirulence gene (avr) in the pathogen enables the plant to fend off the pathogen's attack.

Plants lacking r, or pathogens lacking avr, lead to disease. Among the many r genes that have been cloned, one is a gene from tomato called pto. This gene encodes an enzyme that functions as a kinase -- it transfers a phosphate group from adenosine triphosphate (atp) to an acceptor protein. Tomato plants that have pto are resistant to attack by strains of the bacterium Pseudomonas syringae that have the corresponding avirulence gene which is termed avrpto. After infection by a microbe, it was known that resistance is signalled by the production of reactive oxidative substances by the plant, but until the present work the details were unclear.

Chandra and her group worked with cell suspensions of the tomato and made use of plants that were genetically identical, except in respect of having or not having the r gene and similarly microbes that were identical except in terms of whether they possessed avrpto or not. This meant that four combinations of host and pest could be tested -- one genetic state each of plant and pathogen. The r-avrpto combination enables the plant to defend itself effectively; in the remaining three combinations, the microbe causes disease.

The results are striking and can be stated simply. In the first (protective, successful) case, there are two distinct phases of oxidative burst, both measurable in terms of the rate at which hydrogen peroxide is generated. The first phase peaks within an hour of the onset of infection and the other, a broader peak, occurs about an hour later. In all other combinations, either the second peak is missing or both peaks are missing. Thus, it is the second, delayed peak of peroxide production that enables the plant (presumably) to counter the microbe. Interestingly, a similar 'second' peak occurs upon infection of both tomato strains ( r plus and minus, meaning pto plus and minus) with a variant version of the bacterium that is known to lead to a resistant response in both.

An interesting implication is that it is the second peak that is the invariant correlate of resistance, not the enzyme encoded by the pto gene. The authors conjecture that the first peak may be a non-specific response caused by the entry of a foreign body and that the second peak signals the response of the plant to a confirmatory signal that a pathogen is indeed present. Such caution may be warranted because peroxide can damage both the invader and the host. The precise mechanism by which peroxides lead to protection remains unclear.