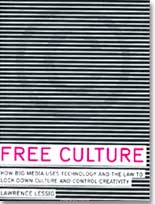 Free Culture, How Big Media Uses Technology and The Law To Lock Down Culture and Creativity by Lawrence Lessig Penguin London 2004

This is the third book by the guru of the creative commons movement, after Code and Other Laws of Cyberspace. The central point of this well-argued work is the importance of the public domain. Concentrating primarily on American law, Free Culture documents the way copyright laws have progressively tightened over the last couple of decades. The author argues that though we celebrate property, there is plenty of value not subject to property strictures. Today corporations want to lock up all of what they describe as intellectual property, but much of that 'property' is built up on prior work. This work was available to them because it was not subject to copyright restrictions.

The author cites examples to bolster his case. For instance, George Eastman invented the roll film and the upshot was the era of mass photography. The real significance was not economic but social. In contemporary times, the Internet allows creations to be shared: web logs, blogs, have grown dramatically.


But at the same time, laws pertaining to intellectual property have tightened. Lessig takes up issues with the biggy of intellectual property rights discourse, Jack Valenti, and shows that copyright laws stifle creativity. But he also argues that this was not always the case. Copyright laws, Lessig argues citing a mass of historical detail, were originally designed to limit the power of publishers who, in 17th century England, were immensely powerful. In fact, things were not stringent even three decades back. In 1975 in the US, a work had to be registered to be copyrighted, and the term was 28 years. This right could be renewed just once. And very often, renewals did not take place. In 1976, the law changed and for all works created after that year there was only one copyright: the author's life plus 50 years. For corporations, the term was 75 years. An amendment to the law in 1978 extended the term for an individual to 95 years. For corporations this term was extended to 120 years. Copyright protects derivative uses also. These are, of course, US laws, but there is increasingly little difference between the US and Europe on these points -- there is indeed much shared history.


For Lessig, the intensification of controls is cause for much concern. Shared spaces are under threat. Documentary film shows during lunch breaks -- once very common in work places in the US-- are a thing of the past. The fear of copyright laws has put paid to them. And this not all. Technology researchers have been warned against violating the US Digital Millennium Copyright Act, 2000. It is true that technologies of the Internet are open to snoops. But they are also visited by sharers. So what is the way out? Lessig does not offer much by the way of solution, except harping endlessly on the loss of independence. He does show that the current punitive laws have worked to the detriment of a reasonable balance between opposing interests: public good and individual enterprise. But offers little on how to resolve this dichotomy.


There are other issues that exercise Lessig. Among them is the length of ownership and the tight control over what consumers may do with the content. Although this book focuses more on the entertainment industry than on the open-source software movement, the same principles apply, and in fact Lessig cites free software guru Richard Stallman as one of his most important inspirations.

Lessig closes with an argument that lawyers should not be content simply to profit from copyright laws. Instead, he appeals that they should work to change them. In addition, he believes that the file-sharing -- an issue about which the entertainment industry is very exercised today -- won't be a contentious matter in ten years' time. He argues that by then, technology would have evolved to ensure higher speeds, pervasive connectivity and better access to content. So Lessig argues that any systems we put in place to compensate creators under today's conditions should be merely transitory.

Free Culture is essential reading for anyone who wants to understand today's copyright wars and their background.

Anivar Arvind is a freelance writer